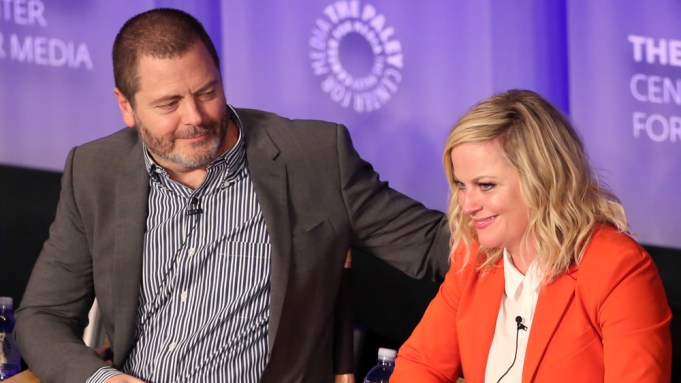 For one night, Hollywood felt a little like Pawnee.

In an era where classic shows are constantly being rebooted, like “Will & Grace”; eagerly awaited to be revived, like “The Office”; or turned into a movie spinoff, like “Deadwood,” the cast said they’re frequently asked about returning to “Parks and Rec.”

“I think that in the world we live in now, nothing is ever gone. I felt the show had an argument to make, and the argument was about teamwork and friendship. I don’t feel like we left anything on the table,” co-creator Michael Schur said. “I would never ever say never. The chance to do it again, should it arise, would be incredible, but we would only do it if we all felt like there was something compelling us to do it. If one single person said no, we wouldn’t do it.”

Earlier in the night, Poehler said she’s ready to return to the series as soon as Schur gives the word.

“Mike Schur is currently working on about five shows,” Poehler told Variety on the red carpet. “Whenever Mike is ready, I’ll put on my suit again for sure.”

Offerman also said “we’d all come running” if Schur “came up with an original, new idea” for a revival.

During the panel, moderated by comedian and self-proclaimed “Parks and Rec” fanboy Patton Oswalt, Schur and the cast revealed how closely the characters were based on the actors’ actual personalities.

“We all got a lot of freedom to really play around and dig into who we were playing, but I do think we also brought a lot of ourselves to these characters. We had to play things quite real, being documentary-style,” said Poehler, who nearly teared up during the initial roar of applause for the cast.

Poehler, who starred as the perky local politician Leslie Knope, added that her role even benefitted her well-being offscreen.

“Leslie was really good for my physical and mental health. Playing her and getting to come in and tell everyone how great they were, it really did extend my life,” she said.

“The Venn diagrams of who they are as people — this is true for everybody — and who their characters are, overlap a lot,” Schur said. “Ron Swanson became Ron Swanson because the writers took a trip to Nick’s real-life wood shop.”

In addition to Offerman and Swanson, the staunchly Libertarian, always-positive parks department director Chris Traeger and Lowe also paralleled each other. Schur said he got the idea for Traeger’s catchphrase “literally” after Lowe used it several times during their first meeting. According to Schur, the close friendship between Poehler and Jones formed the basis for the fierce bond between their characters Knope and Ann Perkins.

“The way I pitched it, it was a show about female friendship. Leslie and Ann were the core of the show, that’s why the pilot was about them meeting,” Schur said. “I think the saddest I ever got on set was the episode where Chris and Ann were leaving, in part because it was the end of an era and because Rashida and Amy were very good friends in real life.”

Galentine’s Day, held on Feb. 13 for women to celebrate one another, transcended the screen, like other “Parks and Rec” jokes, and has become an unofficial holiday. Retta, creator of the self-indulgent phrase “Treat yo’ self,” said she can’t walk around Target without seeing the show’s influence. And O’Heir, who played the ever-teasable Jerry Gergich, can’t go a day without someone saying “Damn it, Jerry!” Webster’s Dictionary even changed the definition of “literally” to also mean “figuratively” in 2013 after Lowe’s character popularized the word so much.

Ending its seven-season run in 2015, the final episodes of “Parks and Rec” included time jumps at several points, sometimes accurately predicting what would happen in the present. One throwaway joke called the Chicago Cubs winning the World Series, and Pratt described how he sarcastically said he would join the cast of “Jurassic Park 4” in a behind-the-scenes video. (He would go on to star in “Jurassic World” in 2015 and its sequel.) Ansari remarked how unbelievable real-world events, like the failed Fyre Festival, could’ve been in the show.

“There’s so many things I’m like, ‘That’s something that Michael and the writers would’ve come up with.’ I was reading about that college admissions scandal and I was like, ‘That’s some Eagleton s—,'” he said, referencing Pawnee’s privileged, hateful neighboring city.

In another reflection of modern politics ahead of its time, the fourth season of the series had Knope pitted against Bobby Newport (Paul Rudd), the dim-witted heir to a rich family, in a city council election.

“If only we had Bobby Newport now,” Poehler said. “Leslie Knope is kind of like the Spider-Man of public service. It does feel a little bit like we’re looking up in the sky and being like, ‘Leslie where are you?'”