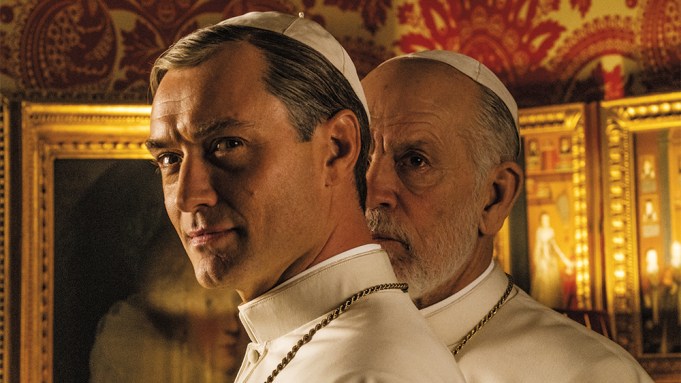 In a trailer for Paolo Sorrentino’s “The New Pope,” a grizzled new pontiff, played by John Malkovich, walks through the Vatican amid a bunch of male clerics while his predecessor, a winking Jude Law, strolls down a beach in a papal white Speedo amid a gaggle of female admirers.

But in spite of his head-turning promenade, Law’s character has fallen into a coma in the eight-part show, which is a a follow-up to “The Young Pope.” Two episodes of “The New Pope” are set to world premiere Sunday at the Venice Film Festival.

Writer-director Sorrentino spoke with Variety exclusively about the show, which is a Sky, HBO and Canal Plus original, produced by Wildside, Haut et Court TV and The Mediapro Studio, being distributed internationally by Fremantle.

The concept is simple. The basic idea is to latch on to the end of the first season. The pope, played by Jude Law, goes into a coma that, from a scientific standpoint, is considered irreversible and can only end up in death. So the church has to resort to a new pope, who is played by John Malkovich. But since we are in a territory where reason is overtaken by spiritual mysteries and by God, Jude Law’s coma may not be so irreversible. It may have some unexpected novelties, so that two popes can co-exist in the episodes that follow.

It’s different from the real situation because there you have a pope who resigned [Benedict]. Here instead you have the pope played by John Malkovich [called John Paul III] and then another pope who re-emerges from a supposedly irreversible coma, which can be considered a miracle. This creates a disruption. For one billion Catholics, this reawakening can be thought of as a resurrection which within the fictional story that we are telling can lead to new and unpredictable consequences.

What else characterizes the narrative in “The New Pope”?

While the first season had a spiritual dimension – and we also had to introduce the characters – this time around we were able to focus more on plot lines and events. So there are more references to current events; there is constant stream of current-events references, in particular to potential forms of ideological fanaticism that can have negative repercussions on the church.

Sounds like you are trying to say something about the dangers of religious fanaticism.

The series tries to take a broad approach to the topic of religious fanaticism, which is usually associated with recent acts of Muslim terrorism. But it’s actually not just limited to that. I see the Vatican as a thermometer of all the potentially explosive forms of fanaticism. In the current political climate where everything is possible…with the sudden rise of leaders who have unexpected followings, it’s not just about Islamic terrorism. Forms of fanaticism can also be found within a Catholic context….So we are trying to look ahead – not at what what we know, but at what could take place.

Talk to me about working with John Malkovich.

He came to visit me at my country home, and after we spent some time together, I started shaping this pope’s character on my intuitions about Malkovich. He’s perfect for this part because he’s as mysterious as the Vatican, but has this innate elegance which I immediately tried to capture.

And working with Malkovich and Jude Law. How was that? Must have been fun.

The fun thing is that John is American, but he plays a British pope, while Jude is a Brit and he plays an American pope. Regarding the interaction between them, they always seemed to be having a really good time spending time together. And they had a lot of fun acting together, as often happens between high-caliber actors.

I know you did a Venice shoot. What can you tell me about that?

The seventh episode is almost entirely set in Venice, in a palazzo where Jude Law spends time with a family. Just like in the first season, there is a digression [in Episode 7] where we go off track, away from the dynamics of the Vatican. A sort of vacation – a breath of fresh air, you could call it – set in Venice.

There is also the Venice Lido beach in this episode. Could this somehow be a homage to the festival?

It’s true there is a Venice beach scene, but I would not call it a homage. Since I’ve been to the Venice Film Festival many times, the only beach I knew was the one in front of the Hotel Excelsior. So we shot it there….It’s a beautiful beach that in winter seems abandoned, which was perfect for me, since I wanted a melancholic atmosphere which has nothing to do with the joyous festival vibe.

Cigarettes sort of played a part in the first season. Do they also in this installment? If so, how autobiographical is this element?

It’s something very autobiographical. Totally going against the grain and dominant ideology according to which cigarettes are considered satanic – and, from a medical standpoint, there is no doubt that they are – I can’t deny that from a psychological standpoint for some fragile people, and I am one of them, tobacco is a comfort. A sort of maternal crib that one can retreat to, even at the age of 50, because we all want to be in the crib. And tobacco gives you that illusion….Psychologically, having the possibility to retreat into the crib gives comfort.