Continue to Variety SKIP AD
You will be redirected back to your article in seconds
Oct 5, 2019 2:45pm PT 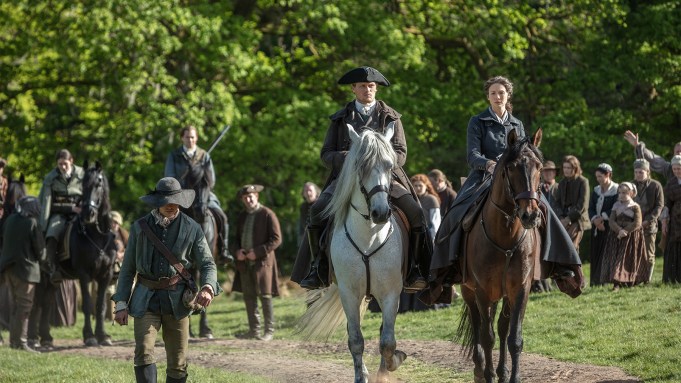 The passionate love affair featured on Starz’ time-travel drama “Outlander” has drawn fans over the years. According to series star Caitriona Balfe, who plays Claire, one half of that central romance, the fifth season will only continue to stoke those fires.

“It’s wonderful to be able to play a relationship that keeps growing and growing, and deepening and deepening. And I think that that’s something that you really see evidence of this season,” Balfe said at the New York Comic-Con panel for the show on Saturday. “It’s just that time and just that the love that they have for each other, it just keeps expanding. And you know, you don’t think that that’s possible from Season 1, but it really does. I mean, they’re there for each other no matter what. They support each other through really tough, tough times. It’s just their knowledge of each other and how intimately they know what’s going on inside each other. I think it’s really beautiful.”

Sitting alongside her co-star Sam Heughan, the two drank shots of whiskey to honor the beloved marriage of their on-screen couple. He toasted her while declaring, “Here’s to making love without making love.”

Balfe talked about Claire, a character who brought the actress international, as well as awards, attention and who became a case for female empowerment as someone who has evolved greatly over the past few seasons. “I think when we first met Claire in Season 1, she was just a very young woman who was not really living her life in the present. … She was not connected to who she really was. … It’s like anyone: When you live your life to the fullest and with passion — like the passion that you find with Jamie, like the passion that she finds in her career — then you become really just a whole and full version of yourself.”

Balfe also expressed her belief that Claire “could do a lot for women” if she was sent to this time period.

But in the upcoming fifth season of “Outlander,” Claire and Jamie are still in colonial America, fighting for their family and the new home they forged. Claire will have to use her modern medical knowledge and foresight, but while focusing on protecting others, she risks losing sight of what it means to protect herself. She feels particularly responsible for her family being where they are, and Jamie notes that if the war she told him will come really is imminent, they would be safer in her real time. This is evidenced by the first-look trailer Starz revealed at the panel, and which can be seen above.

The show was previously renewed for two seasons, which means the upcoming 12-episode fifth season is just the start of more adventures to come. Season 5 will revolve around the fifth book in Gabaldon’s series, “The Fiery Cross,” while Season 6 will draw from the sixth installment, “A Breath of Snow and Ashes.”

Gabaldon admitted she doesn’t know how the show will end, but she expressed her support of the adaptation, saying, “They have done a fabulous job with this show and I am so grateful for them.”

Starz also revealed some images from Season 5 of “Outlander,” which you can see below: