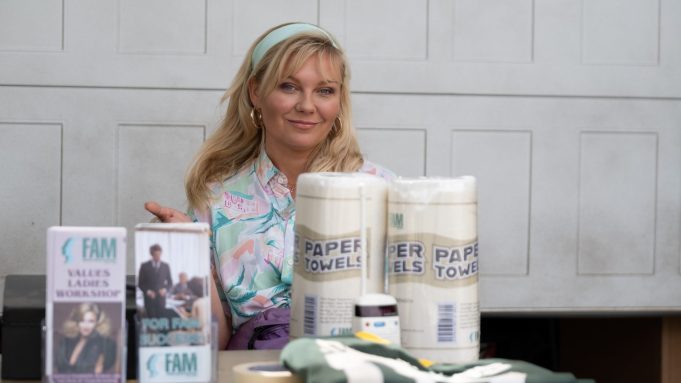 Showtime has renewed the Kirsten Dunst-led comedy series “On Becoming a God in Central Florida” for a second season.

Dunst stars as Krystal Stubbs, a minimum-wage water park employee in 1990s Florida who lies, schemes and cons her way up the ranks of Founders American Merchandise (FAM) — the cultish, flag-waving, multibillion-dollar pyramid scheme that drove her to ruin in the first place, run by the powerful Obie Garbeau II (Ted Levine). Determined to make a better life for herself, Krystal dives deep into FAM and develops a tangled relationship with FAM’s most loyal and fanatical follower Cody (Théodore Pellerin), until her business begins to affect those closest to her, including Ernie (Mel Rodriguez), her affable water park boss, and his FAM-skeptic wife Bets (Beth Ditto).

The series was created by Robert Funke and Matt Luske, who also serve as executive producers. Esta Spalding serves as showrunner. Dunst and Charlie McDowell also executive produce along with George Clooney and Grant Heslov of Smokehouse Pictures. The series is produced by Sony’s TriStar Television.

“With such imaginative storytelling and an absolutely inspired lead performance, ‘On Becoming a God in Central Florida’ has been a revelation,” said Jana Winograde, co-president of entertainment for Showtime. “Kirsten, Esta, Robert, Matt and Charlie have crafted a wondrous blend of satirical light within the economic and emotional melancholy that confronts so many Americans. We couldn’t be happier that ‘On Becoming a God in Central Florida’, nor more eager to see what wild events await our ensemble in the downline of season two.”

The renewal comes after a long and circuitous path to get the show’s first season on the air. It was announced in June that Showtime acquired the series after it had previously been ordered to series at YouTube Premium while having first been in development at AMC.