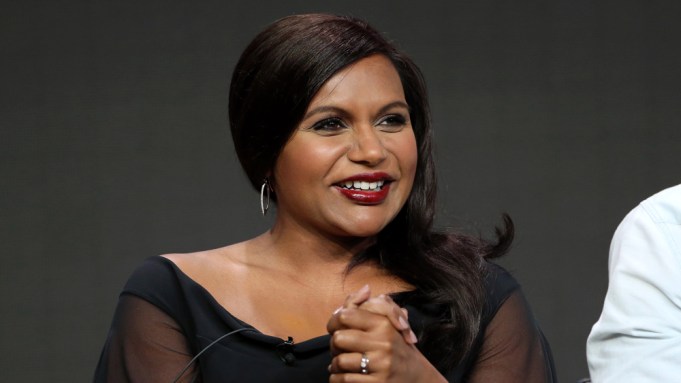 Mindy Kaling was a writer on “The Office” from the show’s start, in addition to appearing on camera as Dunder Mifflin staffer Kelly Kapoor. But in a recent interview with Elle magazine, Kaling said that she had to fight to be initially be included among the producers listed by the Television Academy for the show.

“They made me, not any of the other producers, fill out a whole form and write an essay about all my contributions as a writer and a producer,” she told the magazine. “I had to get letters from all the other male, white producers saying that I had contributed, when my actual record stood for itself.”

Kaling was the only writer of color on the staff in the show’s first year, which made the omission even more glaring. The Television Academy, however, has responded by saying the rule in place at that time required every producer to submit a form explaining their producer bona fides. The exercise came following concerns that too many ineligible producers, such as those not involved in the day-to-day production of series, were being included among the crowd accepting awards on stage.

Others that were vetted that year were executive producers Ben Silverman, Greg Daniels, Ricky Gervais, Stephen Merchant, and Howard Klein; co-executive producers Paul Lieberstein, Jennifer Celotta, Michael Schur, Kent Zbornak and Teri Weinberg; and supervising producer B.J. Novak. (Lieberstein and Novak were also regular on-camera performers on “The Office.”) It’s unclear, however, whether Kaling was asked to provide additional materials beyond what the other producers were required to submit.

In response to the TV Academy statement, Kaling added on Twitter, “Respectfully, the Academy’s statement doesn’t make any sense. I *was* singled out. There were other ‘Office’ writer-performer-producers who were NOT cut from the list. Just me. The most junior person, and woman of color. Easiest to dismiss. Just sayin’.”

She also added in a Twitter thread: “I’ve never wanted to bring up that incident because The Office was one of the greatest creative experiences of my life, and who would want to have an adversarial relationship with the Academy, who has the ongoing power to enhance our careers with awards? But I worked so hard and it was humiliating. I had written so many episodes, put in so much time in the editing room, just to have the Academy discard it because they couldn’t fathom I was capable of doing it all. Thankfully I was rescued by my friends, the other producers. The point is, we shouldn’t have be bailed out because of the kindness our more powerful white male colleagues. Not mentioning it seemed like glossing over my story. This was like ten years ago. Maybe it wouldn’t happen now. But it happened to me.”

Kaling additionally addressed the TV Academy directly: “Hey, @TelevisionAcad! I have been a proud member for years. I was the 1st woman of color nominated for writing a comedy script. Why not say “years ago we prevented a deserving woman of color from getting credit for her accomplishments. We’re sorry and it would never happen now.”?