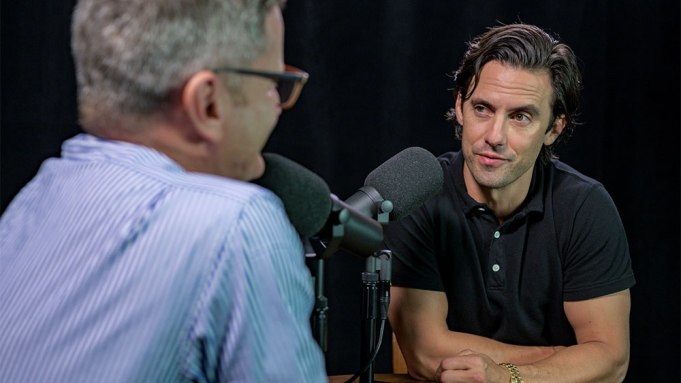 Milo Ventimiglia has dreams of being a superhero.

At least he did earlier this year when Warner Bros. was searching for a new Batman. The “This Is Us” star threw his name in the Gotham ring for the much-coveted role.

“Do I see myself in a cape and cowl?” Ventimiglia asked when talk turned to superhero franchises during his appearance on today’s “The Big Ticket,” Variety and iHeart’s movie podcast.

He certainly did, but “Warner Brothers didn’t,” Ventimiglia said. “They said, ‘Ventimiglia, you’re too old.'”

The studio announced in May that the new Batman will be 33-year-old Robert Pattinson. Ventimiglia, 42, insists he has no hard feelings.

He sure is. In addition to recently picking up another Emmy nomination for his work on “This Is Us,” his new movie “The Art of Racing in the Rain” hits theaters on Aug. 9.

Based on the best-selling novel of the same name and directed by Simon Curtis, Ventimiglia stars in the film as Denny, a race car driver who faces tragedy after getting married (Amanda Seyfried plays his wife) and becoming a father.

Denny is a simple guy who loves his cars, wife, kid and his dog. “He’s not a complicated man,” Ventimiglia said.

That dog is Enzo. Serving as the film’s narrator, Enzo (voiced by Kevin Costner) believes he will be reincarnated as a human.

“He understands that he’s a dog so what he’s pretty much trying to do is soak up as much of humanity from this man and his family as he can so in his next life when he is a human being, he can apply everything and be the best human being,” Ventimiglia said.

Ventimiglia will walk into the Emmys next month as a third-time nominee. He admits he’ll be prepared with some notes for an acceptance speech. “I may be standing up on a stage, I may be sitting in the audience,” Ventimiglia said. “I try not to get too far ahead but also be respectful to the group of people that are assembled there. It’s like go up and know what you’re going to say and know what you’re going to say in 45 seconds and then move on.”

He’s bringing his parents for the first time after they didn’t take him up on the offer in previous years. “I got nominated [and] of course they’re one of the first calls,” Ventimiglia said. “I called mom and dad and I’m like, ‘Hey…’ and I was just about to say, ‘You’re going. You’re going this year. I don’t care what you say’ and my dad goes, ‘Oh, hey. We want to go this year.’ I’m like, ‘Oh, now is the year, pop? You’re not holding out for the Oscars anymore? These are the TV Oscars!’”

You can listen to my full interview with Ventimiglia below to find out what he told me about crying during “Once Upon a Time in Hollywood,” when insecurities and self-doubt get the best of him and Seyfried’s off-camera dirty jokes. “The Big Ticket” can be found at iHeartRadio or wherever you find your favorite podcasts.