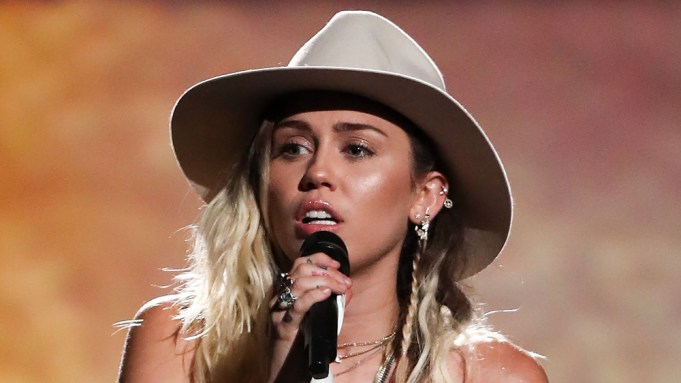 It has been a tumultuous few days in the life of Miley Cyrus.

The singer split from her husband Liam Hemsworth, who filed for divorce on Wednesday citing irreconcilable differences, and released a new single “Slide Away.” Now, Cyrus is set to perform that song live for the first time ever at the MTV Video Music Awards, airing Monday at 8 p.m.

Cyrus released the audio for “Slide Away” to her YouTube account on Aug. 15, with many speculating that the break-up song is about her and Hemsworth’s separation.

“Once upon a time it was made for us / Woke up one day, it had turned to dust / Baby, we were found, but now we’re lost / So it’s time to let it go,” Cyrus sings in the main verse.

Later on, Cyrus appears to once address again Hemsworth directly, telling him that it’s time to move on.

“Move on, we’re not seventeen / I’m not who I used to be / You say that everything changed / You’re right, we’re grown now,” she sings.

After Hemsworth announced the divorce last week, Cyrus took to Twitter to deny cheating on the actor and opened up about previous event in her career.

“It is no secret that I was into partying and drugs in my early teens and 20s,” she wrote in a lengthy thread, after writing that she “cannot accept” the idea that she is “lying to cover up a crime I haven’t committed,” presumably referring to recent tabloid headlines.

“I can admit to a lot of things but I refuse to admit that my marriage ended because of cheating. Liam and I have been together for a decade. I’ve said it before & it remains true, I love Liam and always will,” she finished.

Cyrus and Hemsworth married in December 2018 following the destruction of their home in the Malibu Woolsey Fire and a lengthy on-again-off-again relationship beginning in 2009. News of their separation emerged on Aug. 10.

Cyrus recently announced the debut of her seventh studio album, “She Is Miley Cyrus,” with tracks from different EPs including “She Is Coming,” “She Is Here,” and “She Is Everything.” “She Is Coming” debuted May 31.

Check out the song that Cyrus will perform tonight below: