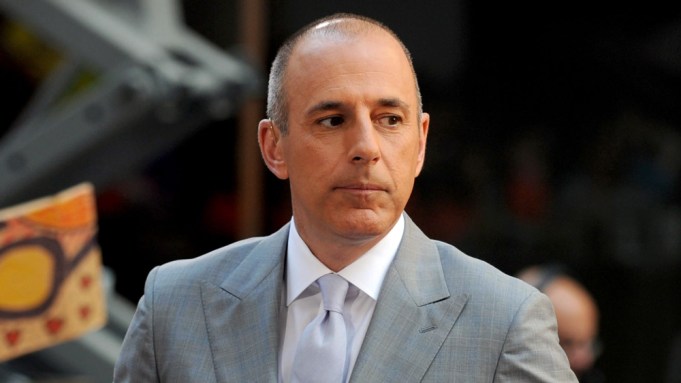 Ronan Farrow’s new book “Catch and Kill” recounts his investigation of Harvey Weinstein; the hurdles his then-employer NBC News put in his way that caused him to publish the story in the New Yorker instead; and how Weinstein hired Black Cube, an investigative firm that employs ex-Mossad officers, to stop him.

But Farrow’s most explosive interview in the book is with Brooke Nevils, the former NBC News employee whose complaint about Matt Lauer led to the co-anchor’s firing from the “Today” show in 2017.

At the time, NBC News kept Nevils’ identity anonymous from press reports at her request. The full details of her allegations have not been made public until now.

In the book, obtained by Variety, Nevils alleges that at the 2014 Sochi Olympics, Lauer anally raped her in his hotel room.

“Matt Lauer’s conduct was appalling, horrific and reprehensible, as we said at the time,” NBC News said in a statement. “That’s why he was fired within 24 hours of us first learning of the complaint. Our hearts break again for our colleague.”

In an open letter provided to Variety by his lawyer, Lauer denies any wrongdoing. “In a new book, it is alleged that an extramarital, but consensual, sexual encounter I have previously admitted having, was in fact an assault,” Lauer says. “It is categorically false, ignores the facts, and defies common sense.”

In Sochi, Nevils was tasked with working with former “Today” co-anchor Meredith Vieira, who’d been brought back to the show to do Olympics coverage. In Nevils’ account, one night over drinks with Vieira at the hotel bar where the NBC News team was staying, they ran into Lauer, who joined them. At the end of the night, Nevils, who’d had six shots of vodka, ended up going to Lauer’s hotel room twice — once to retrieve her press credential, which Lauer had taken as a joke, and the second time because he invited her back. Nevils, Farrow writes, “had no reason to suspect Lauer would be anything but friendly based on prior experience.”

According to Nevils, she “was in the midst of telling him she wasn’t interested again when he ‘just did it,’” Farrow writes. “Lauer, she said, didn’t use lubricant. The encounter was excruciatingly painful. ‘It hurt so bad. I remember thinking, Is this normal?’ She told me she stopped saying no, but wept silently into a pillow.” Lauer then asked her if she liked it. She tells him yes. She claims that “she bled for days,” Farrow writes.

Back in New York City, Nevils had more sexual encounters with Lauer. “Sources close to Lauer emphasized that she sometimes initiated contact,” Farrow writes. “What is not in dispute is that Nevils, like several of the women I’d spoken to, had further sexual encounters with the man she said assaulted her. ‘This is what I blame myself most for,’” she says to Farrow. “It was completely transactional. It was not a relationship.”

She was terrified about the control Lauer had over her career. After her encounters with Lauer ended, Nevils said she told “like a million people” about her situation with Lauer.

“She told colleagues and superiors at NBC,” Farrow writes. She moved to NBC’s Peacock Productions to be a producer, “and reported it to one of her new bosses there.”

“This was no secret,” Farrow writes.

Nothing happened until fall 2017, when the post-Harvey Weinstein reckoning led former “Today” colleagues to ask her about Lauer. Nevils told Farrow she then went to Vieira and told her what had happened. A distraught Vieira, according to the book, urged Nevils to go to NBC Universal human resources with a lawyer, which she did. After Lauer’s firing, she learned that Noah Oppenheim, the president of NBC News, and Andrew Lack, the chairman of NBC News and MSNBC, “were emphasizing that the incident hadn’t been ‘criminal’ or an ‘assault’” — which she claims caused her to throw up, Farrow writes.

“Nevils’s work life became torture,” according to Farrow. “She was made to sit in the same meetings as everyone else, discussing the news, and in all of them colleagues loyal to Lauer cast doubt on the claims, and judgment on her.”

And though Nevils had been promised anonymity by human resources, Lack saying internally that the encounter had happened at Sochi limited the possibilities of complainants — and soon, everyone knew it was Nevils. Though Nevils had not wanted money, she went on medical leave in 2018, and was eventually paid, Farrow writes, “seven figures.”

“The network proposed a script she would have to read, suggesting that she had left to pursue other endeavors, that she was treated well, and that NBC News was a positive example of sexual harassment,” Farrow writes.

The book paints NBC News executives as obstructive in his Weinstein investigation. As Farrow amassed his reporting about Weinstein, Oppenheim asked him, “Like, is this really worth it?” and suggested no one knows who Weinstein is. Farrow was eventually told to stop reporting the story, because it was under review at NBC Universal. “This is a Steve Burke decision. It’s an Andy decision,” Farrow recalls Richard Greenberg, the head of NBC News’ investigative unit, telling him. Since he didn’t believe NBC would ever run his story, he took it to the New Yorker, where it was published in October 2017.

Sources at NBC News say they haven’t read the book yet, but they plan to defend the company’s decisions against Farrow’s claims.

In anticipation of the publication of “Catch and Kill,” Oppenheim told Variety earlier this month: “We are more confident now than ever in the decisions we made around Ronan’s reporting.”

Based on the fact-checking process for the book, NBC News is bracing for a blistering portrait of the news division and its leadership. The company is prepared to present its rebuttal to claims that may be in the book. Farrow “is entitled to disagree with the decisions we made but he’s not entitled to his own set of facts,” Oppenheim told Variety.

“Catch and Kill” comes out on October 15.