Matt Lauer Accuser Brooke Nevils Slams Him for Victim Blaming: ‘The Shame in This Story Belongs to Him’ 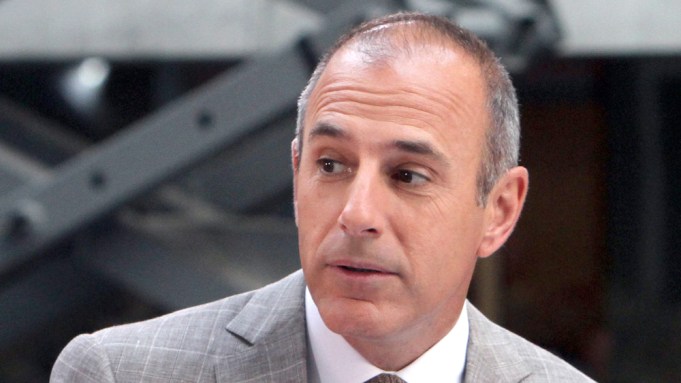 Brooke Nevils, the former NBC employee who accused Matt Lauer of rape in Ronan Farrow’s new book “Catch and Kill,” has responded to Lauer’s denial of her claims, slamming the disgraced news anchor for victim blaming.

In a statement issued to Variety on Thursday morning through a spokesperson, Nevils says, “I knew what kind of person Matt Lauer was when I made the decision to report him to NBC in November 2017, and I knew what kind of a person he was when I made the decision to tell my story to Ronan Farrow. In both of those cases, I asked that my allegations be thoroughly investigated, and that Matt be given the opportunity to defend himself. I provided dates, times, evidence of communications, and corroborating accounts. Both NBC and Farrow found me credible.”

Nevils continues, “As his open letter clearly reveals, there may be more than one Matt Lauer.”

“There’s the Matt Lauer that millions of Americans watched on TV every morning for two decades, and there is the Matt Lauer who this morning attempted to bully a former colleague into silence,” Nevils says. “His open letter was a case study in victim blaming and concluded by threatening any other woman who might dare to speak out against him. This is the Matt Lauer, then the most powerful asset at NBC News, who I feared when I continued to engage with him, as many victims of acquaintance rape do, particularly in the workplace. This is the Matt Lauer I reported in November 2017. I was not afraid of him then, and I am not afraid of him now, regardless of his threats, bullying, and the shaming and predatory tactics I knew he would (and now has) tried to use against me. The shame in this story belongs to him.”

Nevils also took to Twitter to tweet a statement of gratitude to survivors of sexual harassment, writing, “I want to thank the many survivors who shared their stories with me today and offered their support. It takes courage, and I am truly grateful.”

In Farrow’s book, out on Oct. 15, Nevils accuses Lauer of rape at the 2014 Sochi Olympics where she was working with former “Today” co-anchor Meredith Vieira. According to the book, Vieira ultimately convinced Nevils to go to Human Resources with a lawyer. Nevils’ complaint led to Lauer’s November 2017 firing within 24 hours.

Nevils spoke on the record to Farrow for the first time, detailing a night in Sochi where she says Lauer anally raped her in his hotel room.

Nevils says she ran into Lauer while having drinks with Vieira at the hotel bar where the NBC News team was staying. After six shots of vodka, Nevils ended up going to Lauer’s hotel room twice — once to retrieve her press credential, which Lauer had taken from her as a joke, and the second time because he invited her back to his room. Farrow writes that Nevils “had no reason to suspect Lauer would be anything but friendly based on prior experience.”

Lauer quickly responded to Nevils’ rape accusation with an open letter via his lawyer in which he denies any wrongdoing, but does admit to having an extramarital affair with Nevils.

“In a new book, it is alleged that an extramarital, but consensual, sexual encounter I have previously admitted having, was in fact an assault,” Lauer wrote in the letter. “It is categorically false, ignores the facts, and defies common sense.” Lauer goes into great detail of his affair with Nevils, writing, “I had an extramarital affair with Brooke Nevils in 2014…It began when she came to my hotel room very late one night in Sochi, Russia. We engaged in a variety of sexual acts. We performed oral sex on each other, we had vaginal sex, and we had anal sex. Each act was mutual and completely consensual.”

Lauer fought back at Nevils’ rape accusation, writing about the affair continuing back in New York City, in an effort to discredit her claims. In Farrow’s book, Nevils admits to the sexual encounters continuing after the Sochi Olympics with Farrow writing, “What is not in dispute is that Nevils, like several of the women I’d spoken to, had further sexual encounters with the man she said assaulted her. ‘This is what I blame myself most for,’” she says to Farrow. “It was completely transactional. It was not a relationship.”

In response to Lauer’s denial of Nevils’ claims, Farrow’s team released a statement to media, stating, “The stories about and comments from the brave women who spoke out for the book will be enough to refute anything he has to say.”

Farrow says that Nevils had told many of her colleagues and superiors about the situation, and she was scared of the control Lauer had over her career. “This was no secret,” Farrow writes.

NBC News issued a statement on Wednesday, following Variety publishing the excerpt with the rape allegation, which read: “Matt Lauer’s conduct was appalling, horrific and reprehensible, as we said at the time. That’s why he was fired within 24 hours of us first learning of the complaint. Our hearts break again for our colleague.”