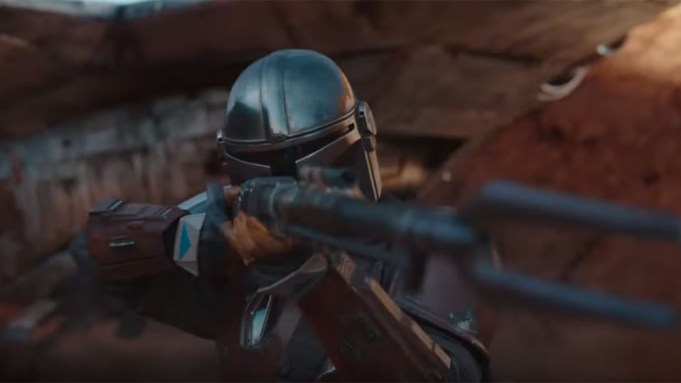 Disney has dropped the second trailer for Jon Favreau’s upcoming Star Wars series for Disney Plus, “The Mandalorian.”

The trailer teases the titular bounty hunter (Pedro Pascal)’s origin, showing him walking through a town filled with Storm Troopers’ heads on pikes.

“Is the world more peaceful since the revolution?” a voice — revealed as Werner Herzog — narrates. “It is a shame that your people suffered. But bounty hunting is a complicated profession.”

Herzog’s character is seemingly answered by the Mandalorian kicking some Storm Trooper ass. Glimpses of his various adventures around the galaxy are revealed, with the Mandalorian getting in a gunfight or two and being dragged along behind some type of intergalactic rhino.

“Mandalorian, look outside,” Herzog says, as the action increases. “They are waiting for you.”

“The Mandalorian” hits Disney Plus on Nov. 12. The series takes place five years after the fall of the Empire and 25 years before the emergence of “The Force Awakens'” First Order. Gina Carano, Nick Nolte, Giancarlo Esposito, Carl Weathers, Emily Swallow and Taika Waititi also star.