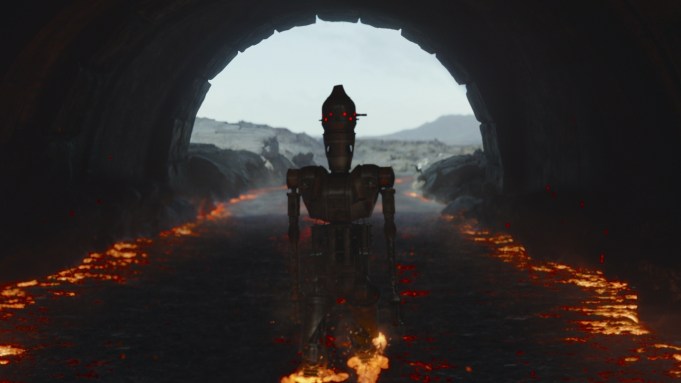 SPOILER ALERT: Do not read on if you have not watched the finale of Disney Plus’ “Star Wars” spinoff series “The Mandalorian.””

The season finale of “The Mandalorian” was crammed with as much action, drama and laughter as you’d expect an episode of television directed by Taika Waititi to be.

“Redemption” closed as almost every episode did before, with Mando jetting off into the galaxy with Baby Yoda by his side. But this time, he has a purpose other than survival: to bring the Child back to its people.

Here are some burning questions following this week’s episode.

How many more celebrity cameos will there be in season 2?

Part of the fun of “The Mandalorian” was trying to spot the celebrity cameos littered throughout the season. Some (like Amy Sedaris and director trio Dave Filoni, Deborah Chow and Rick Famuyiwa) were easier than others, and the season finale opened with two big surprises. Those two chatty troopers at the very beginning were none other than Jason Sudeikis and Adam Pally. But after their assault the internet’s supreme leader — Baby Yoda — they were promptly canceled by another meme-baiting fav, Waititi.

Who was under the Mandalorian’s helmet?

Surprise, it was Pedro Pascal all along! Fans had to wait till the final episode of the season to get a glimpse, albeit a pretty brief one, if Pascal’s debonair looks. Sadly, Mando wasn’t looking too good at the time, and Pascal’s face was covered in blood and sweat. Technically he didn’t break his Mandalorian vow by taking it off in front of a droid rather than a human, but here’s hoping to see more of Pascal’s considerable acting chops in the facial department going forward.

Will IG-11’s death mean the end of Waititi’s involvement in the series?

The multi-talented Waititi directed and played a prominent part in the finale, which saw IG-11 sacrifice itself at a crucial moment to allow Mando, Baby Yo, Cara Dune and Greef Carga to escape. But does the bounty droids tragic demise mean that Waititi will no longer be involved with the series? IG-11 had become arguably the second most beloved character in the series (behind the green one of course) and the finale had plenty of moments which showcased Waititi’s directorial flair and knack for perfectly balancing humor and drama. Showrunner Jon Favreau previously revealed that Carl Weathers will be joining the director team for season 2, and the mastermind behind the show would do well to invite Waititi back too.

Who was that mysterious figure at the end of episode 5?

The question still remains, who was that character bending over Ming-Na Wen’s corpse at the end of the fifth installment? It could theoretically have been Moff Gideon, but he doesn’t make that clinking sound when he walks and surely there would have been some kind of big fanfare revealing him as the presence who has been pursuing Mando for quite some time. There’s really no one else it could be from the cast of characters who have already been introduced. The fan theory that it’s Boba Fett resurrected from the depths of the Sarlacc Pit is still alive!

Where does the show go from here?

The answer seems to be obvious from the finale: Mando is now on a mission to find Baby Yoda’s people and return the little scamp to them. That of course assumes there are more of the Yoda species out there somewhere, and teases that we might get to see more of the force sensitive green aliens in the near future, a tantalizing prospect! Especially since absolutely nothing is known about the Yoda species or their home world, perhaps the only truly untapped part of Lucasfilm in the entire wookiepedia.

But as ever, protecting Baby Yoda isn’t likely to be easy, perhaps this figurine of a Gamorrean tweeted by Favreau —  confirming the arrival of season 2 in the fall of 2020 — is a hint about future run-ins with members from the Hutt crime syndicate? Plus there’s Moff Gideon who survived that nasty fighter crash.

That final shot of Gideon staring up at the stars with a look of vengeance painted across his face, it doesn’t seem likely that he will give up chasing “the Child” anytime soon. Why he wants to get his hand on Baby Yoda so badly is set to be fully explained, but that and more will surely be revealed in season 2 of the adventures of Mando and Baby Yo.