‘The Mandalorian’: Carl Weathers on the ‘Many Possibilities’ of Baby Yoda and the ‘Blaze of Glory’ in Episode 3 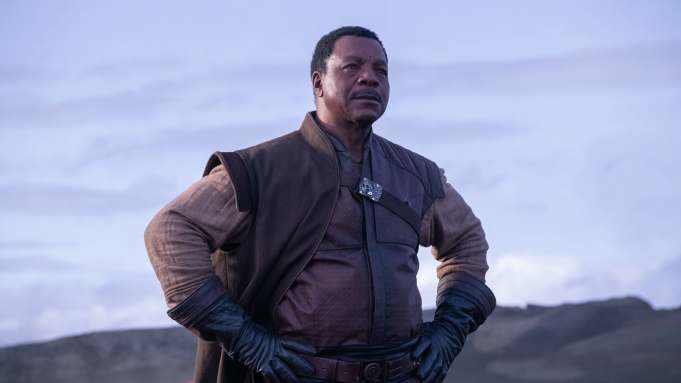 (SPOILER ALERT: Do not read on if you have not watched the first three episodes of Disney Plus’ “Star Wars” spinoff series “The Mandalorian.”)

Everything kicked off in episode 3 of “The Mandalorian.”

“The Sin” ended in a massive shootout between the Mandalorian and the bounty hunter guild, led by the gruff Greef Carga. Pedro Pascal’s character only managed to escape thanks to a band of his jet-pack-fueled Mandalorian friends, who came along in the nick of time to blast a path for him to escape with Baby Yoda.

The final sequence was undoubtedly the biggest, most exciting in the “The Mandalorian” series so far. Speaking to Variety, Greef Carga himself, Carl Weathers, teased that we haven’t seen the last big set piece on the show, and talked working with Deborah Chow and what’s next for his character.

This is the first episode where we see your character Greef Carga step out from the bar table and get in on the action. What did that feel like?

It’s pretty amazing. There’s so much about this third episode that encompasses so much of the action genre. The first two were much more character driven and story driven, this one you get a chance for a blaze of glory, if you will, for Pedro’s character.

Blaze of glory is exactly right, it’s reminiscent of “Butch Cassidy and the Sundance Kid.”

I agree and it took quite a while to shoot — as you can see there were so many elements, so many moving parts. It really is an integral part of the story, especially in this episode with so much action, where so many new characters are revealed. There’s so much in this episode, and in general, that’s entertaining for audiences of all ages.

The addition of Baby Yoda certainly seems like a strong appeal to a younger audience.

I think we’re going to see a lot of that character in everyday life. It’s so loveable for the little ones, and also it has no defined sex or race yet to it. It has so many possibilities around what it could be.

At the end of this episode you’re saved by those two beskar ingots in your pocket, a lucky escape, no?

If you re-watch the episode, it’s planted so early ahead that you don’t even think about it. In writer’s parlance that’s called laying pipe, you lay something down that’s going to be revealed to have great significance later, and I just think the writers did a wonderful job doing it.

Is it safe to assume that Greef Carga isn’t just going to let sleeping dogs lie, that he’s not going to let Mando jet off into the sunset without going after him?

I think there’s definitely a possibility that Greef Carga has something planned for the Mandalorian. I can’t reveal what it is, but we have not seen the last of him yet.

How was working with Deborah Chow? She is getting so many plaudits online for directing episode 3.

She was really fantastic to work with on so many levels. It really came across that she knew what she wanted and had mapped out what this episode was going to be very precisely. As an actor working with so many different directors, when somebody has a great sense of what they want to do, it allows you a lot more freedom and your choices are much more in sync. She took the pressure off of me and the other actors.

She’s the first woman to direct a live-action “Star Wars” project, that seems like a pretty big deal.