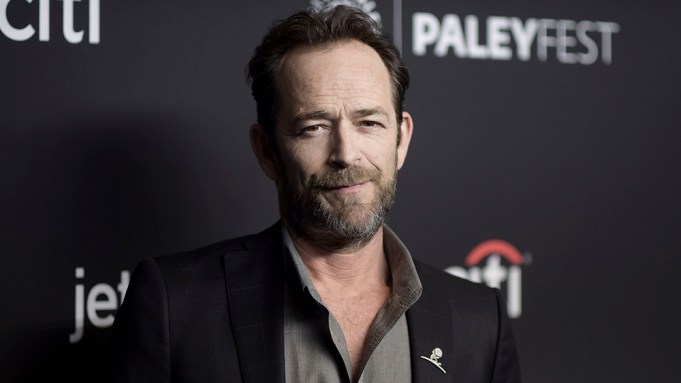 Actor Luke Perry, known for roles in “Beverly Hills 90210” and “Riverdale,” died on Monday after suffering a massive stroke on Wednesday. He was 52.

“[Perry] was surrounded by his children Jack and Sophie, fiancé Wendy Madison Bauer, ex-wife Minnie Sharp, mother Ann Bennett, step-father Steve Bennett, brother Tom Perry, sister Amy Coder, and other close family and friends,” his rep said in a statement. “The family appreciates the outpouring of support and prayers that have been extended to Luke from around the world, and respectfully request privacy in this time of great mourning. No further details will be released at this time.”

Born in Mansfield, Ohio, Perry moved to Los Angeles after high school to pursue acting. His TV career began when he was 16, and the actor cut his teeth acting in soap operas like ABC’s “Loving” and “Another World” on NBC, and doing voice work for animated series such as “The Incredible Hulk” and “Biker Mice From Mars.”

However, in 1990 Perry became a household name for playing the brooding loner Dylan McKay on the smash hit teen drama “Beverly Hills, 90210” on Fox. The show became a phenomenon, catapulting Perry to full-blown teen idol status. He appeared on a racy Vanity Fair cover in July 1992.

Perry had two runs on “90210,” one from 1990 to 1995 and another from 1998 to the show’s end in 2000, during which time his character struggled with alcohol abuse and drug addiction, and went through a series of tumultuous relationships with several other main characters including Brenda (played by Shannen Doherty) and Kelly (played by Jennie Garth).

“Luke will always be part of the Fox family. Our thoughts and prayers are with his loved ones during this extremely difficult time. He will be deeply missed,” said Fox Entertainment in a statement.

He co-starred, opposite Kristy Swanson, in the 1992 movie “Buffy the Vampire Slayer.” While starring in “90210,” Perry made a brief appearance as Billy Masterson in Luc Besson’s whacky sci-fi pic “The Fifth Element” in 1997. He co-starred in the quirky 2007 HBO series “John From Cincinnati,” and had recurring roles on series including “Jeremiah,” “Oz,” and “What I Like About You.”

More recently, Perry made a successful return to the TV drama genre with a regular role on the CW show “Riverdale.” He played Fred Andrews, the conservative, old-fashioned yet soft father of the show’s lead Archie Andrews (KJ Apa).

The show’s writers were among those who took to social media to pay tribute to Perry.

“Luke Perry…you were a joyful and vibrant soul. You will be missed but most certainly your legacy will be remembered forever. Rest in love and peace, friend,” a post from the writers’ room read.

Netflix also released a statement to Variety, saying that Perry’s “Riverdale” performance “left an impression on viewers around the world.”

“We are saddened to hear of the passing of Luke Perry. Luke left an impression on viewers around the world through his work on ‘Riverdale,’ and this is a very sad day both for his fans, and for our staff who worked closely with him. Our hearts go out to his family and friends,” the statement read.

Perry will appear posthumously in Quentin Tarantino’s “Once Upon a Time in Hollywood,” playing the real-life Canadian-American actor Wayne Maunder who starred in the CBS Western TV show “Lancer.”

He is survived by his daughter Sophie and his son Jack, a professional wrestler who goes by the ring name “Jungle Boy” Nate Coy.