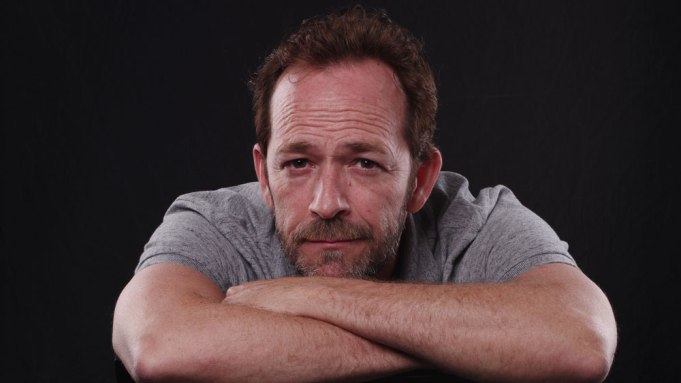 Luke Perry, the actor who made a generation of viewers want to pack up their JanSports and move to Beverly Hills, died Monday at the age of 52.

As Dylan McKay on “Beverly Hills, 90210,” the Ohio native evoked a Pepsi-era James Dean. Perry’s Marlboro Lights, golden tresses and furrowing brow made him dangerous, caused hearts to skip beats and sparked far too many slumber-party debates about why marrying Brandon while cheating with Dylan must be the recipe for life’s true happiness. “Beverly Hills, 90210” enjoyed its best seasons when Brenda (Shannen Doherty) and Kelly (Jennie Garth) quarreled over Dylan – love triangle! (Of course, we all knew Kelly was his real soulmate.)

Sadly, the show missed the mark when Dylan’s daddy drama and alcohol and drug addictions veered into afterschool special territory When Dylan wasn’t bouncing in and out of rehab — did he want us to hate him that badly? — he had to rescue his half-sister Erica from her thieving con-woman of a mother, Suzanne Steele (Kerrie Keane), and Suzanne’s sleazy boyfriend in Mexico. What about the time he tried to avenge his father’s death only to learn that his father faked said death to enter witness protection? So silly.

Despite the shortcomings of “90210,” it was never hard to imagine jumping into the passenger side of Dylan’s sportscar and riding off into the sunset wearing matching leather jackets and black sunglasses. Did Dylan and his peek-a-boo hairline make him look older than the other boys? Sure, but he was not the show’s only mature star. Perry, who had a hard time enjoying his teen-idol status, joined Fox’s genre-defining teen drama at the age of 24 — the same age when Dean tragically died in a car crash. Earlier in his career, Perry found minimal success on daytime soaps such as “Loving” and “Another World” and worked in construction between acting gigs. But “90210″ gave him the kind of broad fame that is rarely attained in the internet era.

As Perry aged and outgrew his Dylan persona, he struggled to carve out a new path in an industry that was all too happy to typecast him as a teen heartthrob or nothing at all. Then along came HBO’s frighteningly frank prison drama “Oz,” in which Perry snagged a two-season role as a convicted embezzler named Rev. Jeremiah Cloutier.

Portraying a preacher man allowed Perry to show another side of his acting talents as a flawed but faithful-to-the-Word minister who tried to redeem himself by sincerely helping other prisoners in need. A softer, more remorseful and non-violent departure from Dylan, the role gave Perry — who had become a husband and father by that point in his life — the freedom to sport a shaggy mane and beard. It’s a freedom that also allowed him to transcend his poster-boy prettiness and grow professionally.

Perry, who looked damned good in a cowboy hat, clearly enjoyed embracing his gruffer, hirsute countenance and distinguished smile lines as he effortlessly slid into rugged roles in made-for-TV Westerns. The list includes “A Gunfighter’s Pledge,” “Goodnight for Justice” and four other Hallmark Channel cowboy offerings.

His return to broadcast series television on another teen drama, the CW’s “Riverdale,” marked a full-circle moment for Perry. As Fred Andrews, father to KJ Apa’s Archie, Perry could proudly and comfortably don his salt-and-pepper beard while giving a wink to more seasoned viewers who remembered his teen-idol past.

Aging with grace and determination, Perry showed that he was more than a school-girl fantasy. In honor of Perry and our inner teen screams, we should throw on a Scrunchie and pour out a little Coke and a little Pepsi. After all, Dylan would never make us choose.