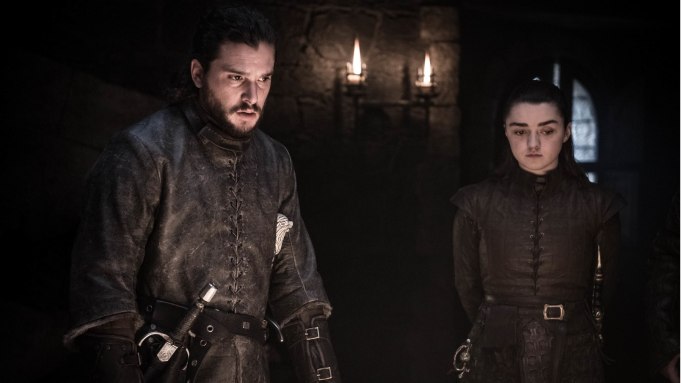 With “Game of Thrones” hype at an all-time high, Las Vegas may be raking in as much money as the Iron Bank.

HBO’s fantasy masterpiece has seized the gambling world’s attention nearly as much as the Super Bowl or Kentucky Derby. Fans spew countless theories on social media, such as which characters will be axed and who will sit on the Iron Throne, but betters put their money where their mouths are. Popular betting sites, like Bovada, have calculated the odds on Westeros’ most burning (and wildest) questions. For example, what are the odds that Arya will wear Littlefinger’s face?

Here are the wildest bets you can make on the final season of “Game of Thrones:”

Will Cersei Give Birth?

Does Tyrion Have a Secret Plot with Cersei?

Who Will Win Cleganebowl?

How Many Living People Will Arya Kill In Season 8?

Will Quaithe Be Shown Again In The Final Season?

What Will Bran Warg Into Next?

Who Will Die First?

Who Will Kill Cersei?

Who Will Rule Westeros?

According to the odds, Jon Snow is the most likely to sit on the Iron Throne, assuming his rightful status as the true Targaryen heir. He’s followed closely behind by Bran Stark, who used his creepy greensight power to reveal the truth about his brother, er, cousin. Sansa, the current leader of Winterfell and serious doubter of Daenerys, edges out the Targaryen princess, who’s may have been building up her army all these past eight seasons for nothing. It’s interesting to note that Petyr Baelish a.k.a. Littlefinger, who seemingly had his throat slit in the Season 7 finale, still has a chance to take the Iron Throne. Some fans believe he may have faked his death and is still out there.

The Greyjoy family, especially Euron and Theon, doesn’t get much love. The three remaining members are in the top five characters most likely to die first this season.

Jaime is the most favored character to kill off his sister/lover this season, beating out Arya, who has the Mad Queen on her list of targets to kill.

Finally, most fans think that Cersei is lying about being pregnant, and that she doesn’t have a secret plan with her brother Tyrion to break her alliance with Jon and Daenerys’ army, but only time will tell.