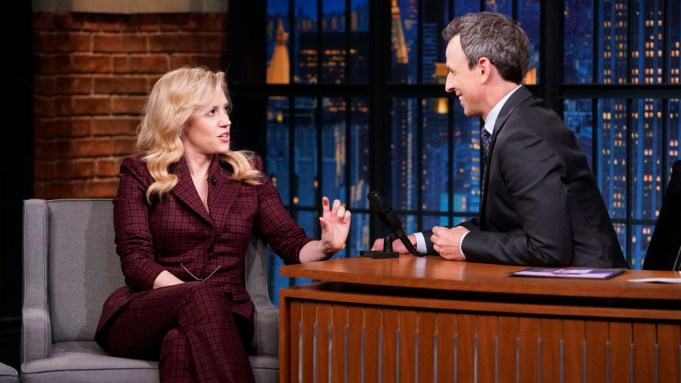 “Gosh, I wish there was an ‘SNL’ show this week,” said McKinnon, of the missed opportunity to skewer the debates on the sketch show. Meyers pointed out that time might be running out for McKinnon to poke fun at Williamson, who had some of the debate’s oddest utterances. “She might not make it to the fall,” said Meyers. “The window for Marianne Williamson impressions might be closing fast.”

Channeling the self help guru turned presidential candidate, McKinnon laid out the plan — or anti-plan — for America. “I’ve heard a lot of plans here tonight. And if we think plans are going to beat Donald Trump, we got another thing coming,” she began.

“My plan is to gather all the sage in America and burn it. My plan is to harness the energy of babies to finally put a man on the moon,” she explaied.

McKinnon gave her version of the Kiwi phone call, “I said to the president of New Zealand, I said, ‘Girlfriend, you’re so on.” McKinnon’s Williamson would also give some new age advice to U.S. president: “And I would say to Donald Trump, ‘Boyfriend, you chill.'”

Watch the impression above.