Continue to Variety SKIP AD
You will be redirected back to your article in seconds
Feb 21, 2019 8:13pm PT 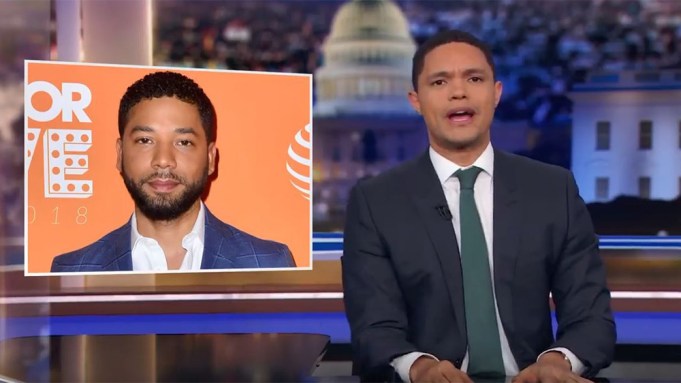 As the Jussie Smollett saga continues to unravel, late night hosts are echoing the incredulity expressed by many by poking fun at the “Empire” actor’s alleged attempt to fake a hate crime, reportedly because he was dissatisfied with his salary.

“This dude may have faked a hate crime just to get a raise?” asked Trevor Noah on “The Daily Show.” “What’s the logic there? You get your ass beat and then you go to your boss and go, ‘Hey, I need another million dollars, I need to buy some band-aids?’ What was the thinking? That’s not a good way to get a raise, people.”

Noah then went on to detail a time-honored method of gaining greater remuneration.

“I mean call me old-fashioned, but whatever happened to just going into your boss’ office and blackmailing him with nudes?” Noah asked. “This is such a petty reason to pull off such a major crime. Imagine if we found out the reason Tupac faked his own death was to get out of a Blockbuster late fee.”

‘They’re saying he paid his accomplices with a check,” Noah continued incredulously, after a reel showed news clips detailing the many incriminating pieces of evidence the police have reportedly found. “What, did he also write ‘fake hate crime’ in the memo? Even amateurs know, if you commit a crime, you go all cash people!”

“You’ve never seen a movie where the bad guys are like, ‘I need you to get rid of someone for me. Now who do I make this check out to?'”