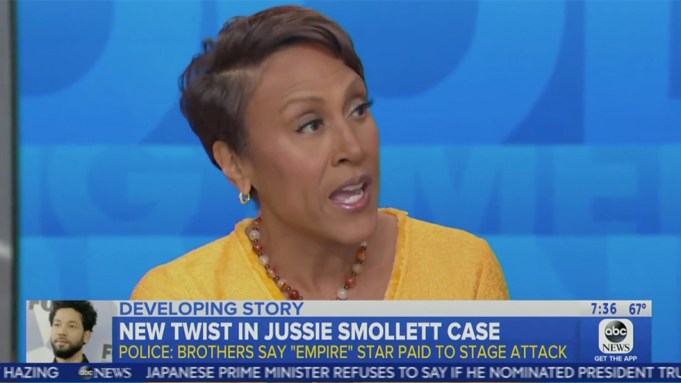 A week after her candid interview with Jussie Smollett about the actor’s alleged attack, “Good Morning America” host Robin Roberts has reacted to news of Smollett’s arrest. In a turn of events, Smollett was taken into police custody Thursday and is being charged with filing a false police report.

“This touches all the buttons,” Roberts said on-air during Thursday’s episode of “GMA.” “It’s a setback for race relations, homophobia, MAGA supporters. I cannot think of another case where there is this anger on so many sides, and you can understand why there would be.”

ABC News chief legal affairs anchor Dan Abrams informed Roberts that her interview with Smollett will likely be used as a piece significant evidence in the ongoing investigation.

Roberts went on to clarify the context for her original sit-down with Smollett.

“At the time, on Tuesday, police officer were saying that his account was consistent, it was credible, and that he was being cooperative,” Roberts said. “Now this was all before the interview aired on Thursday, and then we found out about the brothers.”

The brothers Roberts is referring to are Olabinjo and Abimbola Osundairo, who were allegedly paid by Smollett to physically attack him and yell racist and homophobic slurs in the early hours of Jan. 29. Police said Smollett paid them $3,500 by check and promised to pay an added $500 after the incident.

After Smollett was arrested Thursday, Chicago Police officials concluded that Smollett orchestrated a hate crime against himself because he was “dissatisfied with his salary” on the Fox series “Empire.”

Smollett has maintained his innocence throughout, but the police made it clear on Thursday that they have no doubt that he set up the hoax.