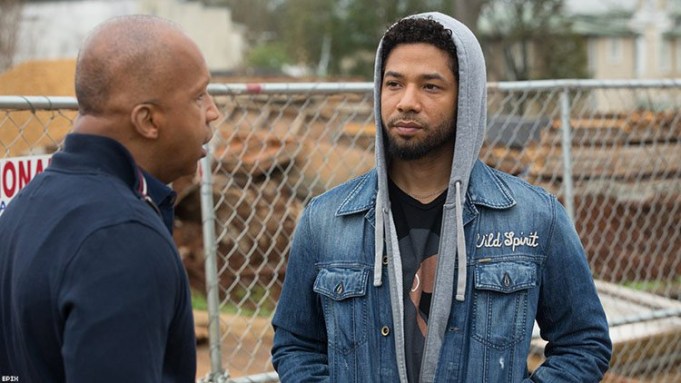 In May 2018, Jussie Smollett appeared as the narrator and correspondent in an episode of the Epix documentary series “America Divided” that explored the subject of hate crimes, specifically lynching, in the state of Tennessee.

Now that the “Empire” actor has been charged with filing a false police report and Chicago police are convinced he staged his own hate attack because he was “dissatisfied with his salary,” Smollett’s involvement in the show is cast in a different light.

“When the news initially came out, we were horrified by the story and for myself, it’s hard to get away from the coincidence,” the series’ director Lucian Read told Variety. “Of course in this country we believe in innocent until proven guilty, but assuming the allegations are true, I wonder whether coincidence is the right word — to take this truth about hate crimes and turn it into a fiction like that, it’s remarkable.”

“It seems both an incredible coincidence and also proof of the terrible things that happen in this country,” Read added.

Smollett initially described how he was attacked by two men in masks who threw bleach on his clothes and put a rope around his neck. However, prosecutors are now alleging that Smollett paid two brothers, Abel and Ola Osundairo, to help him stage the attack.

Read said that Smollett was “a pleasure to work with,” and that despite the “crazy, strange” recent developments, he and the producers are still “very proud” of the episode and “think the best of Jussie.” He continued, “We really believed it was the strongest episode in the season and explored issues that need to be discussed in this country. … Jussie and all of us were extremely committed to making a great show.”

Epix has since pulled the episode from its network and released the following statement:

“In light of – and with respect to – the sensitivities around recent events, we can confirm that Epix is no longer making available the episode of ‘America Divided’ featuring Jussie Smollett.”

Each episode of the show consists of a celebrity host (everyone from Norman Lear to America Ferrara) exploring important narratives such as inequality, education, healthcare, and criminal justice through expert interviews and the testimonies of locals across America.

In episode four of Season 2, Smollett visits the National Memorial for Peace and Justice in Montgomery, Ala., which is “dedicated to the legacy of enslaved black people, people terrorized by lynching,” according to its website. He talks with its founder, Bryan Stevenson, about the lack of recognition for this terrible part of American history in a moving segment, and later sits down for a tense conversation with the local spokesperson for the family of Nathan Bedford Forrest, a Confederate general whose statue was removed from a park in Memphis last year.

During an interview with 98-year-old Charlie Morris, whose older brother Jesse Lee Bonds was the victim of a lynching in Arlington, Tenn., in 1939, Smollett discovers that the men who committed the hate crime were briefly charged with murder, but then acquitted.

“I pray that in your lifetime you see justice, but I promise you that in mine, we will,” the actor says to Morris.

Later, Smollett visits a general store in the middle of town, the site where Bonds’ murder allegedly occurred.

“You can almost feel like a … just what (Bonds) must have been feeling,” Smollett says, shivering.

“Who knows how many other bodies were never found. It was inhumane then, and for anybody that does not want to acknowledge what happened, it’s inhumane now,” he says near the end of the episode, kneeling on the river bank where Bond’s body was found.