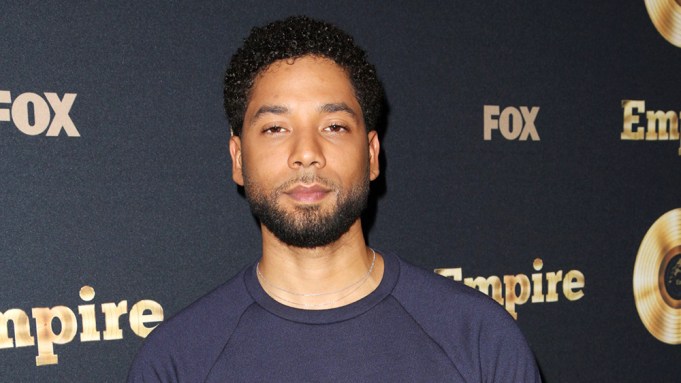 Jussie Smollett is back on the set of “Empire” in Chicago following his release from police custody on Thursday, Variety has learned.

Smollett was released after posting bail in Chicago after police charged him with staging what was originally reported as a hate crime last month. He was originally intended to film throughout this week on the Fox series, but his role was dramatically reduced in light of his ongoing legal troubles.

Fox has stood behind the actor for the most part, issuing multiple statements backing him as evidence grew that he had staged his own assault. Earlier on Thursday though, the network released a new statement that said in part, “We are evaluating the situation and we are considering our options.”

Even with his mounting legal troubles, Smollett has big pockets of support within Fox and there was hope as late as Wednesday that he would be able to finish out his work on the series. “Empire” has about an episode and a half of filming to finish in its fifth season, or a little more than a week’s worth of work. Smollett had been given a few days off this week to address his worsening legal predicament, nearly three weeks after he first reported being the victim of an early morning hate crime near his Chicago apartment on Jan. 29. He was released Thursday after a bond hearing on $100,000 bail.

Smollett surrendered to authorities and was arrested early Thursday morning in Chicago. He faces one felony count of filing a false police report. He has claimed that he was the victim of an assault in the early morning hours of Jan. 29 in Chicago, stating two men hurled racist and homophobic slurs at him, beat him, poured bleach on him, and placed a rope around his neck. Smollett also said that the two men used the phrase “MAGA country” during the assault, a reference to President Donald Trump and his “Make America Great Again” slogan.

During a press conference on Thursday morning, Chicago PD officials stated they believed Smollett staged the attack because he was “dissatisfied with his salary” on “Empire.” Multiple Fox insiders said Smollett never approached the network or studio for a raise. He is believed to be making about $60,000 an episode for the show’s current season. That’s up from about $20,000 when the series debuted in 2015, when Smollett was a lesser-known actor.

Police also said that Smollett had sent a threatening letter to himself that was received at Fox days before the attack. The detail and vehemence of the police case against Smollett — Chicago Police Department Superintendent Eddie Johnson called his actions “despicable” — puts more pressure on Fox to act. Smollett’s case could test the entertainment industry’s post-#MeToo resolve to stand up to allegations of wrongdoing and misconduct by prominent figures.

Smollett and his representatives have repeatedly denied that he staged the attack.

According to a bond proffer released by prosecutors on Thursday, Smollett enlisted brothers Abel and Ola Osundairo to help him stage the attack. He allegedly gave the brothers money to purchase supplies to use in the attack, including ski masks and and rope. Smollett is also said to have written a check to Abel in the amount of $3,500 for he and his brother’s help in faking the assault.

The tension within Fox about how to handle Smollett is heightened by the fact that the actor is well-liked among network and studio brass. He’s routinely described as the “consummate pro” who was always ready to do press promotional appearances on behalf of the show or the network. “When an executive needs a star to show up at a charity dinner, Jussie’s the one you call,” a senior Fox executive said.

Insiders who have worked closely with Smollett say they cannot understand why he would be motivated to be part of an elaborate hoax. Sources said the actor continues to maintain his innocence in his communications with network and studio executives, and that the actor has expressed to those around him that he is deeply upset and anguished over the accusations and the apparent damage to his career.

Fox sources say no decision has been made about Smollett’s fate as Fox and Imagine executives huddle to consider options.

Unlike some other ensembles, the cast members of “Empire” earn vastly different salaries. Terrence Howard and Taraji P. Henson, already established stars prior to the launch of the series, earn a per episode haul in the low six-figures for their roles on the show, significantly more than the $60,000 Smollett reportedly makes. Compare that to fellow 20th Century Fox show “This Is Us.” While the five core cast members of that series earned different salaries early on in the show’s run, they recently renegotiated ahead of the show’s third season. Milo Ventimiglia, Mandy Moore, Sterling K. Brown, Chrissy Metz, and Justin Hartley now earn $250,000 per episode.