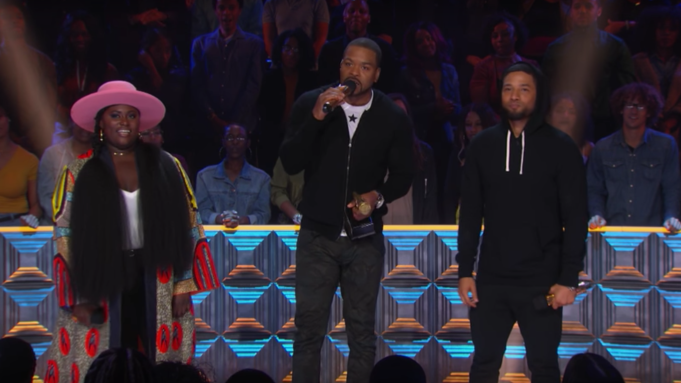 TNT has pulled an upcoming episode of its hip-hop roast battle show “Drop the Mic” featuring “Empire” star Jussie Smollett. The episode, set to air March 6, was yanked following the arrest of Smollett on Thursday for allegedly staging a hate crime against himself.

In the episode, Danielle Brooks, who plays Taystee on “Orange Is The New Black,” faced off against Smollett in a battle. Also on the episode, famed “American Idol” star Clay Aiken took on “Beverly Hills, 90210” and “Sharknado” star Ian Ziering.

“We had an episode of ‘Drop The Mic’ this season with Jussie that you’ll now (correctly) never see, but sadly it will shelve Clay Aiken, WHO WAS A VERY GOOD RAPPER (at least for now),” executive producer Jensen Karp wrote on Twitter.

The Smollett episode of “Drop the Mic” is actually already available in at least one spot, however: YouTube is currently offering the episode for a $1.99 fee. The episode — which is marked as the 13th from Season 2, was apparently first released online on Feb. 6, but a TNT spokesperson confirmed that the network is now looking to remove it. The episode had already been pushed by several weeks following the initial reports of the attack against Smollett, but now it appears to not be on deck to air at all on TNT.

“We are pulling the episode in the interest of not being exploitative of an incredibly sensitive situation,” the TNT spokesperson said. “We are holding on airing his episode for now and we are replacing it with the Raven Simon vs Ron Funches and Joey McIntyre vs Joey Fatone episode.”

TNT’s decision comes as Fox mulls the fate of Smollett on “Empire.” As reported earlier Thursday, 20th Century Fox TV and Fox Entertainment said in a statement that “we understand the seriousness of this matter and we respect the legal process. We are evaluating the situation and we are considering our options.”

Smollett surrendered to authorities and was arrested early Thursday morning in Chicago. He is charged with filing a false police report and disorderly conduct. The actor and musician claimed that he was the victim of an assault in the early morning hours of Jan. 29 in Chicago, stating two men hurled racist and homophobic slurs at him, beat him, poured bleach on him, and placed a rope around his neck. But Chicago Police officials asserted that Smollett set up a hate crime hoax because he was “dissatisfied with his salary” on “Empire.”

“Drop the Mic,” based on the segment from “The Late Late Show with James Corden,” is a bit of a celebrity roast, as stars come on and put up with some choice disses as they also lob some good ones at their rap opponent. Other matchups in Season 2 included Jerry Springer and Ricki Lake, Shaquille O’Neal vs. Ken Jeong, Jay Pharaoh vs. Marlon Wayans, Luis Guzman vs. Gabriel Iglesias, Seth Rogen vs. Joseph Gordon-Levitt, James Corden vs. Dr. Phil, Mark McGrath vs. Jodie Sweetin, Hanson vs. Sam Richardson, and Michael K. Williams vs. Trevor Jackson.