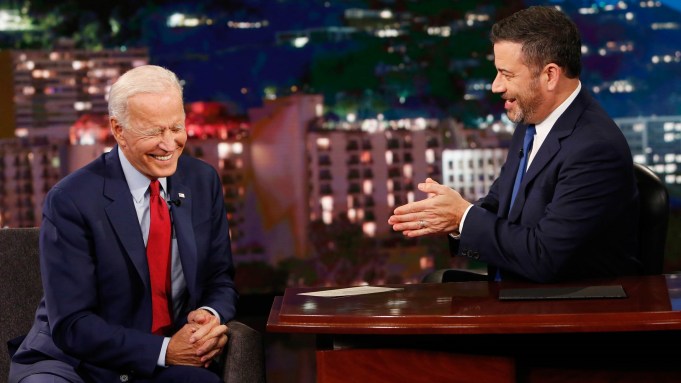 Former US Vice President and current US Presidential candidate Joe Biden addressed the impeachment inquiry into President Donald Trump during an appearance on “Jimmy Kimmel Live” on Wednesday.

“The idea that someone would call a head of a foreign state, ahead of time withhold significant military aid that’s badly needed in order to prevent the Russian separatists who are in Ukraine, from taking over Ukraine, and then ask basically can you cooperate with Rudy Giuliani- he’s coming over,” Biden told the late-night host. “And the thing I learned, the thing we all learned recently, in that statement that 200 word statement released was talked about getting the Justice department engaged in this. It’s such a blatant abuse of power that I don’t think it can stand.”

Kimmel also asked Biden how the past 48 hours of news has ranked on the “outlandish scale” given Biden’s long career in politics, to which Biden replied “18 out of 10.”

Speaker of the House Nancy Pelosi announced on Tuesday that the House was opening a formal impeachment inquiry into Trump after it became public that a whistleblower had filed a complaint over a phone call Trump had with Ukrainian president Volodymyr Zelensky in July.

It was alleged that Trump asked Zelensky to investigate Biden and his son Hunter’s business dealings in Ukraine while also withholding $400 million in military aid to the Eastern European country. The White House released notes on the call publicly, with Democrats saying it proves Trump was trying to get a foreign leader to provide damaging information on a political rival, while Trump has repeatedly called the inquiry a “witch hunt.”