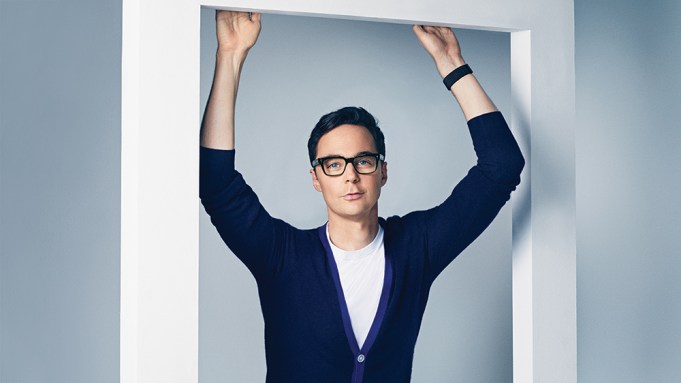 Jim Parsons just stepped away from a 12-year commitment — and is preparing to step into a new yet familiar role. After four Emmys and untold numbers of physics-inflected jokes on “The Big Bang Theory,” Parsons is reprising a part he played on Broadway in 2018. A Netflix adaptation of the drama “The Boys in the Band,” to be executive produced by Ryan Murphy, is slated to start filming in July. It’s a role that comes with some complications for an actor who only just moved from the “Big Bang” home base in Los Angeles to New York.

“No matter how successful you are,” Parsons says, “even if you’re a huge success in movies, you don’t get to check into the same parking space for 12 years. This is not how someone in a creative profession normally gets to behave. Most human beings crave that structure, so I can see how it causes some hurricanes in the heart.”

Parsons’ tenure on “Big Bang Theory,” which wrapped in May, brought him into the national consciousness, and provided ample time to build out a character legions of fans will continue watching in the spinoff “Young Sheldon.” “I played the s— out of that character, and some people could have done it longer probably — I don’t mean our show, but this relationship with the character,” says Parsons, who is 46. “But I feel like we really wrung that material for what it was.”

It also brought, in the off-season, creative opportunities like “Boys in the Band,” about a group of gay men coming together for a night of embittered camaraderie, fighting against a society that doesn’t want them. Parsons’ character, he says, is “swimming as fast as he can to keep above the waters of his own tortured psyche and his own feelings of hating himself. But he doesn’t succeed — nobody would for very long.”

Parsons has witnessed the speed of social change both in his work and in his life. In his youth, he says, “the sight of pride parades frightened me, because I knew that there were plenty of people around me — whether they were in my life or I just was aware of them — that derided this show of pride.” Later, as an actor trying to make it in New York, “my only feelings were, I’m going to avoid that area of town because I don’t like crowds.”

The actor, who graduated from the University of Houston after growing up in the suburbs of that city, came out to his family after meeting his now-husband, Todd Spiewak. “No offense to the lovely men I dated before Todd, but somewhere deep inside, I immediately knew that there was no choice left but to deal with this, because to not let them in on this person I had met was to officially start putting up these lifelong barriers.” He came out publicly in 2012, a year after performing in the Broadway revival of canonical gay play “The Normal Heart,” in a manner that made waves for quite how amiably low-key it was: an offhand disclosure in The New York Times.

Which is not to say that Parsons feels low-key about pride, or his own pride, nowadays. “Once it was out in the public, I was like, ‘Well, f— you! If you still have a problem with gay people, you directly have a problem with me. Being a full-fledged member of it and claiming it, there was just an elation there, and there still is! I still feel it. It’s a huge relief, and it’s also really nice to sometimes be able to feel righteous anger.”

His work after “Big Bang Theory” expresses both sides of that equation. “The Boys in the Band,” with its savage insults deployed by individuals irreparably damaged by society’s unkindness, provides the rage. And “Special,” a short form Netflix series that Parsons executive produces with Spiewak, makes for the giddy joy. Written by Ryan O’Connell, the show made headlines for depicting the life of a gay man with cerebral palsy, but delivers perhaps its greatest impact through comic frankness about dating. Parsons is well aware of the advance in representation “Special” is, but he comes at the project from a different angle. Spiewak had discovered O’Connell’s writing, and Parsons leveraged his producing power at Warner Bros.’ digital producing arm to find it a home. “He felt like my kind of people,” Parsons says. “There are a lot of life experiences that he and I do not have in common, and we don’t see things the same way. But there’s something we have in common at a deeper level.”

It sounds a bit like the process, one that lasts a lifetime, of finding one’s community — a bit like Parsons’ evolution toward the concept of pride. As he puts it, “It’s a discovery of a strength and a power that perhaps you didn’t realize you needed.” That can be as important for elite actors and producers as it is for kids in Texas.