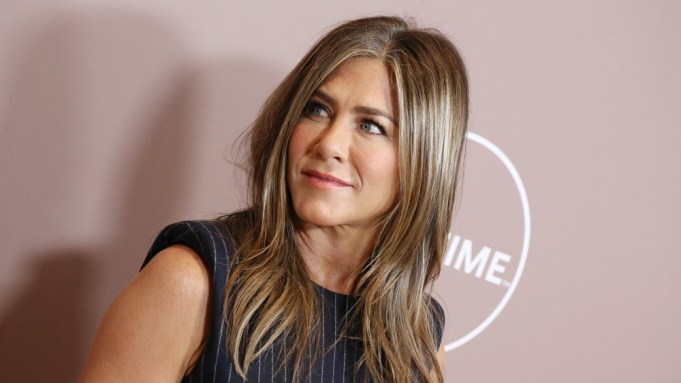 This is “The One Where Jennifer Aniston Joins Instagram and Crashes It With a Selfie.”

Aniston made her Instagram debut on Tuesday morning by sharing a photo of her and her five co-stars from the classic NBC sitcom “Friends.” The selfie, featuring Lisa Kudrow, Courteney Cox, Matthew Perry, David Schwimmer and Matt LeBlanc, temporarily crashed Aniston’s profile page on the social media platform.

Her page is now back up and the photo has amassed more than 2.4 million likes.

“Friends,” which first aired on Sept. 22, 1994, recently celebrated its 25th anniversary. Could the silver anniversary lead to a silver-screen reunion?

Aniston spoke about the possibility of a “Friends” film during her interview for Variety’s Power of Women issue.

“It depends,” Aniston said. “I mean, we haven’t all sat in a room. But would we have loved to have done something together? Yeah. It would have been fun. We could have redesigned it for a couple episodes. But whatever. Maybe it’s better this way, but we’ll never know.”

In late 2018, Netflix announced that “Friends” would be leaving the platform. After public outcry, the streaming service reportedly paid $100 million to retain the rights to “Friends” through 2019.

Aniston spoke to Variety about the “Friends” craze continuing well past the show’s finale.

“It’s a phenomenon that I am amazed by,” she said. “To have a whole new generation of children adoring the show as much as they did back in the day when it was airing for the first time is incredible. I want to know what people love so much about it, because there wasn’t any of this. Now most people’s consumption is the [phone] screen, which I’m very conflicted about. If you can’t drive until you’re 16 and you can’t drink until you’re 21, why should you be allowed to have social media? Like to have a distraction that prevents you from learning to connect with people?”

When asked if she thought social media should have an age limit, Aniston responded, “I don’t know. I don’t have kids. I just know that I’m watching my girlfriends’ children and they’re all struggling because of social media. Do you know that mental health has gone through the roof? And primarily what they’ve discovered, it’s because of social media. It’s compare and despair, over and over again. Do they like me? Do they not like me? Am I good enough? It’s hard enough as it is being a kid without the damn ‘likes’ or ‘not likes.’ I wish they would remove the ‘like.’ Why do they need them? Why do we need a comments section, where these trolls with no lives try to be hurtful?”