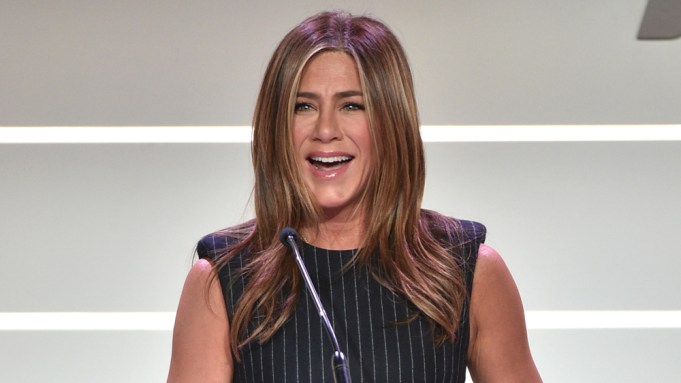 “It’s funny, I’ve never actually thought of myself as ‘powerful.’ Strong, yes. But powerful, not [really],” Aniston, one of Variety‘s six Power of Women honorees, said on Friday at the Beverly Wilshire. “It’s a distinction I’ve actually been thinking about a lot lately because that word — ‘power’ and its counterpart, ‘abuse of power’ — keeps coming up in light of what is happening in our country and in our industry, a rebalancing of the scales, I guess you could say.”

The “Morning Show” star ruminated on the meaning of the word at Variety‘s Power of Women luncheon presented by Lifetime. She recalled that a parental figure asked her, when she was 11 years old, to excuse herself from the dinner table “‘because I didn’t have anything interesting to add to the conversation.'”

“I carried that sentence with me into adulthood,” she said.

“This last two years have really made me think a lot about the messages we send young kids — little girls especially. How the things we say and do can either build them up — or tear them down. And make them feel like maybe their voices don’t matter.”

Aniston said she began to see herself in a different light and find her voice when she began working on “Friends.”

“I started meeting all of these people who expressed to me how much the show meant to them — how it lifted their spirits during a bad breakup or got them through an illness. I was just so incredibly moved by that. And I began to change the way I thought about my own voice, and what it meant to have a platform to use it,” she said.

She said “true power” comes from using one’s voice “to hold people up and bring people together.”

The hit NBC sitcom also afforded her the opportunity to meet Marlo Thomas. Her TV mom introduced her to St. Jude Children’s Research Hospital, a pediatric facility that provides free medical care to children with life-threatening diseases like cancer.

“Right around this time every fall, we shoot the holiday PSA, and I get to spend the day with a family of St. Jude. I always say it’s the best day of the year and the hardest day of the year,” she said, recalling meeting a little girl at a taping a few years ago who asked her, “What is cancer?” Aniston said she was moved by the fact that the seven-year-old, Sawyer, was fighting a deadly disease, but didn’t know its name.

“That’s what’s unbelievable about these kids. Despite everything that they are up against — and as much pain as they’re often in — they are vibrant, they are joyful, they are fearless,” she said.