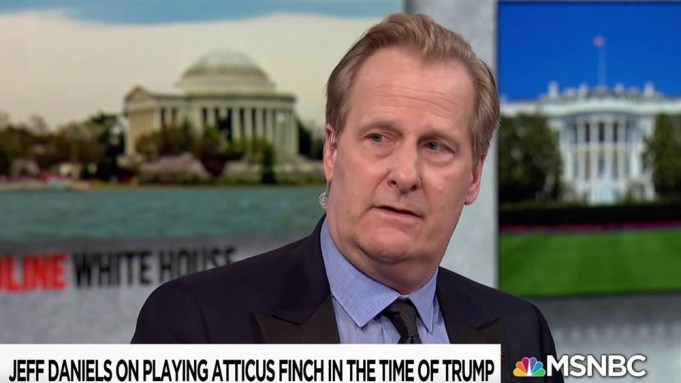 Jeff Daniels took a swipe at President Donald Trump and the GOP during an appearance on MSNBC on Monday.

Daniels spoke with Nicolle Wallace on MSNBC about his role as Atticus Finch in the Broadway production of “To Kill a Mockingbird,” a story about racial politics and discrimination in 1930s Alabama, and spent the segment comparing his play to the country’s current political climate. “Mockingbird” is nominated for nine Tony awards and holds the record for highest-grossing American play in Broadway history.

Daniels currently lives in Michigan, where he said part of the population is apathetic when it comes to voting, making him question where the active voters are and whether they share Finch’s view of inherent decency and compassion. He implied that “it’s the end of democracy” as we know it, if Trump is re-elected in 2020.

“You have to decide whether, like Atticus [Finch], you believe that there is compassion, decency, civility, respect for others, do unto others. All of that stuff you guys believe in, and you still voted not for Hillary [Clinton], or for [Donald] Trump. Where are you now?” Daniels said. “Because your kids are looking up at you going, ‘but he lies,’ and I think there are a lot of people in the Midwest who are going, ‘sigh.’ It might be enough for them. We’re gonna find out, you know, if the big gamble is to go all the way to November 2020, which I agree, and lose. It’s the end of democracy,” he said.

On the panel, he also compared “To Kill a Mockingbird’s” theme of racial injustice to today’s Republican Party agenda.

Daniels later referenced the Mueller report, saying there needs to be a source who sends the Washington Post the redacted documents, comparing the situation to Richard Nixon’s Watergate scandal.

“Courage is standing up and being a true patriot, like we used to have back in 1776. Who are the heroes gonna be? Is it gonna be the Daniel Ellsberg, Pentagon Papers guy? Who’s the guy in the Justice Department that’s gonna go, ‘Here, Washington Post, here’s the redacted [report], go?’ I’m waiting for that guy,” Daniels said. “We need people like that and to look at Congress with all of their politics going, ‘Well, if I do this, I can’t do that.’ You’re all worthless to me right now. No, I need people to stand up and be heroic. Who are you? Because democracy is at stake.”