Ian McShane will still pause and watch an episode of “Deadwood” when it pops up while flipping through channels. “And then I’d finish up, smiling to myself, ‘it’s a really good show!’ It was a great show, a terrific show,” McShane said of the HBO drama, which ran for three seasons from 2004 to 2006.

Now, “Deadwood” is back — in the form of a 2-hour movie, set to premiere May 31 on HBO. The “Deadwood” movie takes place more than a decade later, as a statehood celebration brings back many of the series’ most memorable characters.

“It’s a love letter to the old ‘Deadwood,'” he said. “I think they found the connecting tissue by making it statehood day. There’s a reason a lot of the characters come back.”

McShane said he enjoyed the opportunity to revisit his iconic “Deadwood” character, Al Swearengen — the foul-taking owner of the town’s Gem saloon. Al, however, is in rougher shape a decade later.

“Al is not exactly what he used to be,” McShane noted. “You can’t drink that much and not be.”

McShane is currently seen on Season 2 of Starz’s “American Gods,” in which he plays Mr. Wednesday, an old god on a journey to reunite his brethren to combat the rise of the new gods led by Crispin Glover’s Mr. World.

McShane recently stopped by Variety’s “My Favorite Episode” podcast to discuss the return of “Deadwood,” plus how “American Gods” honors the Neil Gaiman book this season. And he also revealed why he considers the “Atlanta” episode “Barbershop” one of the greatest episodes of TV ever. Listen below. 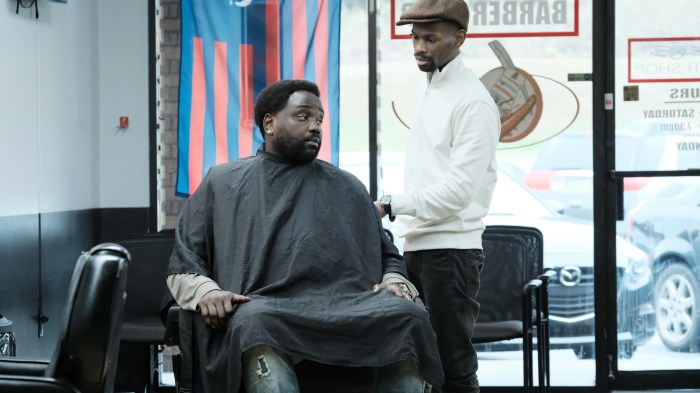 Written by Stefani Robinson and directed by series creator and star Donald Glover, the “Atlanta” episode “Barbershop” was a showcase for star Brian Tyree Henry, who plays Alfred, aka rising hip hop star Paper Boi. The episode aired during Season 2 on March 29, 2018.

Barbershop follows the frustration Alfred endures as he simply wants to get a trim from his barber Bibby, played by Robert Powell. He ends up on a reluctant adventure as Bibby runs a few questionable errands.

Robinson’s script for Barbershop was nominated for outstanding writing for a comedy series at the 2018 Primetime Emmy Awards.

“It was half an hour of pure delight,” McShane said of “Barbershop.” “You never know what’s coming next. It’s a very fabulously entertaining show. I picked that one because he just made me laugh continuously.”

For McShane, who has spent some time in Atlanta shooting various projects, the show transports him to another world he is excited to explore. “You see faces you’ve never seen before, actors you’ve never seen,” he said.

McShane is also in awe of series creator Donald Glover, and is even a fan of Glover’s music work as Childish Gambino.

“I think he’s hugely talented,” McShane said. “And then I heard his music… His music is seriously good. He appears to be a very laid-back guy, which only adds to that marvelous mystique.”

McShane also raves about the HBO comedy “High Maintenance,” which he also appreciates for taking him to a world that “always looks like it’s Brooklyn in the summertime. Everyone is cycling around, it looks like [star Ben Sinclair] is having a good time. And then you come across some extraordinarily graphic stuff. But he’s the center of it, he’s sweet, he doesn’t judge anybody. Same with ‘Atlanta,’ they’re not judging anybody, they’re just living their life, getting on with it in Atlanta.”

McShane also points out that the long gap between seasons on “Atlanta” is similar to the lengthy hiatus for “American Gods,” which returned after a showrunner shakeup (and will return in Season 3 with another showrunner change). “You get on with life,” he said. “The show goes on. And also it takes time.”

A conversation with McShane takes many turns, and during the course of the chat he also references the late, lamented Z Channel — which he credits for introducing audiences to smaller indie films; how he’d suggest his British series “Lovejoy” might be rebooted; how Al Swearengen is basically a 19th century version of David Milch; and how “John Wick” has become a cult fave.

The Season 2 finale of “American Gods” airs this Sunday, April 28, on Starz; “Deadwood: The Movie” premieres May 31 on HBO.

Variety’s “My Favorite Episode With Michael Schneider” is where stars and producers gather to discuss their favorite TV episodes ever — from classic sitcoms to modern-day dramas — as well as pick a favorite episode from their own series. On “My Favorite Episode,” some of the biggest names in TV share their creative inspirations — and how those episodes influenced them.