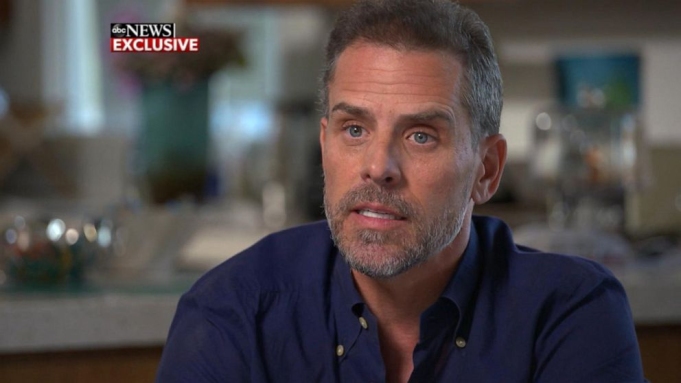 In an interview that prompted tears, Hunter Biden sat down with ABC News’ Amy Robach, stating that he made no “ethical lapse” by sitting on the board of a Ukrainian gas company, and rejected President Donald Trump’s notion that he and his father, former Vice President Joe Biden, have engaged in any wrongdoing.

“I don’t regret being on the board,” Biden said in an interview that was conducted this past weekend at his home in Los Angeles. “What I regret is not taking into account that there would be a Rudy Giuliani and a president of the United States that would be listening to this ridiculous conspiracy idea, which has again been completely debunked by everyone.”

Challenged by Robach, who suggested that viewers at home might wonder how Biden couldn’t have possibly thought of the distraction his foreign business dealings could have created, Biden responded, “You know what, I’m a human. And did I make a mistake? Well, maybe in the grand scheme of things, yeah. But did I make a mistake based upon some unethical lapse? Absolutely not.”

Asked if he believes he is a distraction for his father’s president campaign, Biden firmly disagreed.

He said his father’s reputation should stand on its own among Americans, explaining, “They know who my dad is. My dad doesn’t have to defend me. My dad only has to love me. And my dad loves me unequivocally.” He added, “I am absolutely enveloped in love with my family, and I certainly hope that there are no negative political ramifications of this. I think that the truth always wins.”

“Personally, myself, I’m not necessarily a distraction to his campaign. I’m never a distraction to my dad,” Biden said. “But as it relates to actually going and being on stage with him, this is not a family business … whether it’s a compliment that we’re like the Kennedys or whether it’s a backhanded compliment that you’re like the Trumps, my dad has a job. But that does not mean that I ever had any plans to go do rallies and talk about Donald Trump’s kids, and I never will. That’s not what Bidens do. My dad doesn’t go after people’s kids. He just doesn’t. He never has.”

“Being the subject of Donald Trump’s ire is a feather in my cap. It’s not something I go to bed nervous about at night at all,” Biden said. Continuing to diss the Trump family later in the interview, Biden said, “Unlike them, I don’t spend a lot of time thinking about them. I really don’t. It’s all noise. What they do is create an enormous amount of noise. I have to then answer questions about accusations made by probably the most unethical group of people ever seen in this republic.”

Biden stated that the noise from the Trumps and the controversy stirred up in the media is the real distraction, which is why he will no longer serve on the board of any foreign companies, saying, “I think this is what becomes a distraction because I have to sit here and answer these questions, and so that’s why I committed that I won’t serve on any boards or I won’t work directly for any foreign entities when my dad becomes president.”

Appearing a bit defensive and on edge when asked about his sobriety and time spent in rehab for substance abuse, Biden said, “Like every single person that I’ve ever known, I have fallen and I have gotten up. I’ve done esteemable things and things that have been in my life that I regret — every single one of those things has brought me exactly to where I am right now, which is probably the best place I’ve ever been in my whole life. I’ve gone through my own struggles.”

Biden got emotional when asked if there is anything that he’d like to say to Trump, who, Robach pointed out, would likely be watching the interview.

“No. Really, no,” Biden said with a laugh, in response to the question. “It’s really hard for me to say anything snarky right now or combative because I was raised to respect that office.”

With tears in his eyes, Biden added, “I’m really proud of being an American, but I have to admit, I take no pleasure in this — watching this death spiral of this administration.”