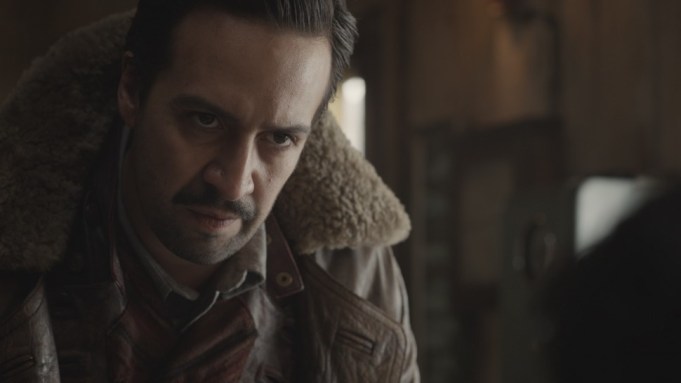 “His Dark Materials,” the fantasy trilogy by Philip Pullman that has captivated readers since its publication in the late 90s, has proven difficult to adapt in the past. If the forthcoming HBO and BBC series doesn’t hit the mark, viewers and critics will once again be sharpening their subtle knives.

The trailer teased the war with the evil organization known the magisterium, with Lord Asriel on one side and Mrs. Coulter on the other. Also mentioned was the child abduction plot at the center of the show.

The preview neatly summarizes Miranda’s mercurial character in one sentence: “I can fight and I can fly.”

During the panel, the ensemble cast discussed what drew them to the project, with Miranda revealing a personal connection to the source material.

“When my wife and I started dating, we read these books together,” he said, drawing loud aww’s from the crowd. “They’re in a really special place in my heart.”

Miranda was approached by the executive producers while shooting “Mary Poppins Returns” in London, and said yes to coming on board as soon as they told him what the project was, before even hearing what part he was being offered.

“My first two days of filming were a very long, complicated sequence where I’m pulling all the pulleys and ballasts in my hot air ballon, and the next one was a three day bar fight, it was Perry different from ‘Mary Poppins,’” Miranda added to laughter from the room.
In a highlight from the panel, Miranda and executive producer Jane Tranter teased that the show will certainly make use of Miranda’s considerable singing chops from the very first time he appears on screen.
“I come into this thing singing a duet with my daemon in a big-ass hot air ballon which was a pretty fun way to enter the world,” he said.

For Wilson, the draw was playing a character who was described to her as “the cesspit of moral filth and the mother of all evil.”

“It’s fun to play a bad character, but she’s unknowable and frightening for that reason,” Wilson said.

Keen revealed, rather guiltily, that she hadn’t read the books before auditioning, pointing out that they were published before she was born and making everyone feel their age in the process. The actress went on to describe how her character changes throughout the series.

“At the beginning, she’s lying all the time and she’s quite arrogant, she’s much more innocent,” Keen said.  “Episode one she’s running around roofs and then bam, life hits her in the face and it makes her grow so much.”

As previously hinted, this isn’t the first adaptation of the Philip Pullman series to feature a heavyweight lineup.

Audiences will may have forgotten, or at least tried to forget, 2007’s “The Golden Compass,” which starred Nicole Kidman in the same role as Wilson, Daniel Craig in place of McAvoy, and Dakota Blue Richards as Lyra.

The Chris Weitz-directed vehicle faired pretty poorly at the box office (a whopping $180 million budget returned only $372 million for New Line) and was roundly panned by critics and audiences.

It’s clear from the scope of the series and the calibre of talent on show that both HBO and the BBC will be hoping for a better response this time around.

In this version, “Logan” standout Keen is in the hot seat as Lyra, a role which is difficult to nail with the intense action sequences and CGI playing out around her. Lyra is accompanied by her furry, feisty ferret daemon. McAvoy plays the adventurer Lord Asriel whose secret expedition is at the center of the narrative. Meanwhile Wilson is taking on the iconic role of the icy Mrs. Coulter. An earlier trailer had teased Coulter’s evil designs and the ferocity of her golden monkey daemon. Miranda, who has big, Sam Elliott-sized boots to fill, rounds out the leads as the adventurer Lee Scoresby.

Also on the panel was scribe Jack Thorne.

The original “His Dark Materials” trilogy is comprised of “The Golden Compass” (also known as “Northern Lights”), “The Subtle Knife” and “The Amber Spyglass.” Pullman has also written a prequel, “La Belle Sauvage,” and has embarked on a new book that picks up where the trilogy left off, so there is plenty of content meat on the bone should the BBC and HBO want to make “His Dark Materials” a multi-series affair. The British broadcaster has already committed to an eight-episode second outing, before the first season even airs.

BBC director general Tony Hall previously discussed how big a swing the series represents for the company, describing the project as “really ambitious” and revealing that the “cost per episode is high.”

The first season will air later this year. HBO is co-producing and has worldwide distribution rights outside Britain.