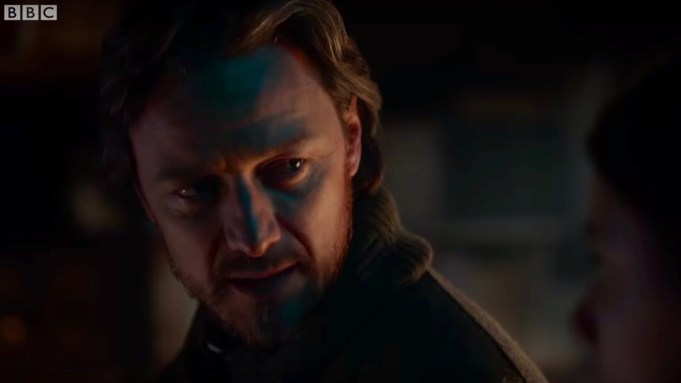 Executive producer Jane Tranter insisted that, despite the protestations leveled at the 2007 film adaptation of Philip Pullman’s novels, the HBO series “is not an attack on religion.”

“We’re adapting the books across the broad expense of television, one of the things that can happen when you adapt a book for film is the that you have to cut down the middle for the story,” Tranter said. “The religious controversy that was around the film was not relevant to the books themselves….Philip Pullman talks about depression, the control of information and the falsification of information….there is no direct contrast with any contemporary religious organization.”

“His Dark Materials” writer Jack Thorne moved the conversation on to the significance of the story being centered around Dafne Keen’s Lyra Belacqua as opposed to James McAvoy’s roguish adventurer Lord Asriel.

“If this was a Marvel movie this would be Lord Asriel’s story…but Philip doesn’t do that, he says we’re gonna dip into Asriel’s story every now and again,” Thorne said.

Keen added that having shows led by young women is “very needy right now” and described her character as a “strong, determined hero.”

The series also stars Lin-Manuel Miranda as the Texan balloonist Lee Scoresby and Ruth Wilson as the icy Mrs. Coulter.

HBO recently released a second trailer for the show at Comic-Con, where the ensemble cast discussed what drew them to the project.

“When my wife and I started dating, we read these books together,” said Miranda. “They’re in a really special place in my heart.”

Miranda was approached by the executive producers while shooting “Mary Poppins Returns” in London, and said yes to coming on board as soon as they told him what the project was, before even hearing what part he was being offered.

For Wilson, the draw was playing a character who was described to her as “the cesspit of moral filth and the mother of all evil.”

“It’s fun to play a bad character, but she’s unknowable and frightening for that reason,” Wilson said.

The original “His Dark Materials” trilogy is comprised of “The Golden Compass” (also known as “Northern Lights”), “The Subtle Knife” and “The Amber Spyglass.” Pullman has also written a prequel, “La Belle Sauvage,” and has embarked on a new book that picks up where the trilogy left off, so there is plenty of content meat on the bone should the BBC and HBO want to make “His Dark Materials” a multi-series affair. The British broadcaster has already committed to an eight-episode second outing, before the first season even airs.

BBC director general Tony Hall previously discussed how big a swing the series represents for the company, describing the project as “really ambitious” and revealing that the “cost per episode is high.”

The first season will air later this year.