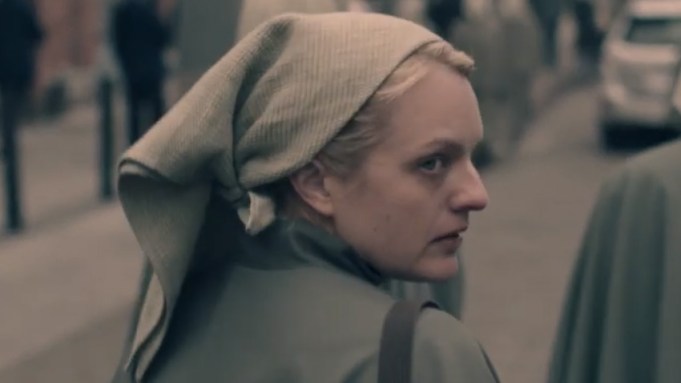 The long-awaited and much anticipated third season of Hulu’s “The Handmaid’s Tale” is just around the corner, and the streaming service released the first full-length trailer for the new season during a Super Bowl commercial slot Sunday.

Hulu provided the first glimpse at what’s in store for Offred on Friday, releasing a short 10-second teaser trailer hinting at how Offred’s fate may have turned out after the end of Season 2.

The new Super Bowl trailer was styled after a political ad, with on-screen text explaining that America is improving — “it’s morning again in America,” a narrator explained.

“Today, more women will go to work than ever before in our country’s history,” it continued as images of wheat and women carrying babies appeared. “This year, dozens of children will be born to happy and healthy families.” The narrator repeated “It’s morning again” on a loop as the images switched to violence, before the trailer settled on the face of June (Elisabeth Moss). Her voice then took over, saying, “Wake up, America, morning’s over” and showed blocks of handmaids in front of the Washington Monument, which had been restyled as a cross.

It seems that Offred, formerly known as June, is slipping into the ranks with the Marthas — the section of women who work quietly under the radar in Gilead’s highest-ranking homes, performing domestic work like cooking and cleaning. Swapping her blood-red Handmaid’s uniform for the subdued Marthas clothing, we’re left wondering whether Offred may have joined the secret ranks who helped facilitate her escape.

Hulu has not yet announced when the third season will debut, but if past seasons are any indication, this should premiere sometime this spring.