‘Game of Thrones:’ Who Will Die in the Battle of Winterfell? 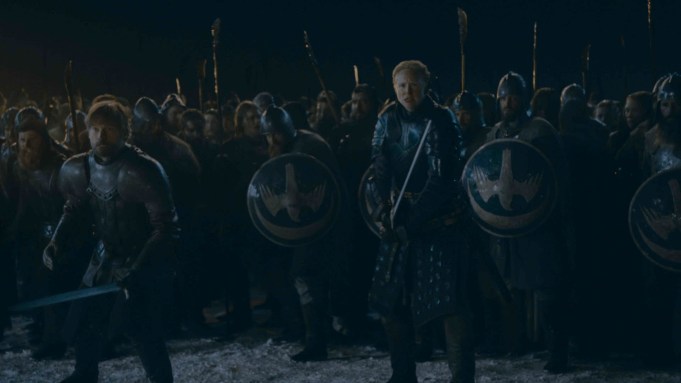 “Game of Thrones” felt a little too happy last week, didn’t it?

The Night King and his army spoiled our heroes’ quiet night of swapping stories and catching up with each other as the battle of Winterfell is finally here. Get your tissues ready as several fan favorites will surely be taken off the playing field this Sunday. HBO’s fantasy masterpiece hasn’t pulled any punches when killing off beloved characters in the past, so who should we brace ourselves to say goodbye to this episode?

Jon Snow: Aegon Targaryen, the prince formerly known as Jon, has survived nearly every major battle in the series, and this one won’t get the better of him.

Daenerys Targaryen: Same as Jon, Daenerys will make it to the end, and possibly fight her nephew/lover for the Iron Throne.

Sansa Stark: Someone’s got to rule Winterfell if it still stands after the battle, and Sansa has quickly proven herself to be one of the smartest leaders in Westeros.

Arya Stark: A girl still has names to cross off her kill list.

Jaime Lannister: The Kingslayer needs to reunite with Cersei one more time, and maybe become a Queenslayer?

Tyrion Lannister: Even though the crypts don’t seem like much of a safe place, Tyrion is too big of a character to bow out before the finale.

Samwell Tarly: He has to be the one to document everything that’s happened in the show’s history once it’s all said and done.

The Hound: Sandor Clegane still needs to duke it out with his brother, The Mountain, in Cleganebowl.

Drogon: Daenerys’ favorite dragon should be safe, but odds don’t look too great for Rhaegal if the two face their undead brother…

Bran Stark: The new Three-Eyed Raven’s plan to use himself as bait for the Night King could turn ugly.

Gendry: There isn’t much left for the Baratheon blacksmith to do after forging everyone’s dragonglass weapons.

Davos Seaworth: The Onion Knight had a good run, but it might be time for him to reunite with Shireen.

Missandei: There’s a good chance Grey Worm’ plan to run away together won’t come true for either of the foreigners.

Night King: Could the show’s ultimate undead villain survive the battle of Winterfell and head to King’s Landing next?

Varys: One of the most cunning strategists, Varys hasn’t had much to do lately and could be killed off soon.

Gilly: Little Sam’s or Gilly’s possible deaths would be the most heartbreaking moment for Samwell.

Lyanna Mormont: It wouldn’t be the first time “Game of Thrones” killed off a fan-favorite little girl.

Rhaegal: If Daenerys’ dragons take on the Night Kings mount, chances are Rhaegal would die first.

Get Ready to Say Goodbye

Theon Greyjoy: The former usurper of Winterfell made a promise to defend the keep, fulfilling a perfect redemption arc.

Jorah Mormont: Cured of his greyscale, the knight is ready to die for his khaleesi.

Beric Dondarrion: Without Thoros of Myr to resurrect him, Beric is on his last life.

Tormund Giantsbane: With giant’s milk coursing through his veins, the wilding is ready to go out in a blaze of glory.

Grey Worm: The Unsullied warrior shouldn’t have made a sweetheart getaway plan with Missandei.

Brienne of Tarth: The most recent knight of the seven kingdoms, Ser Brienne’s arc to greatness seems to have reached its peak.

Podrick Payne: Everyone’s favorite squire looks ready to die for our heroes, and could a posthumous knighthood be coming?

Dolorous Edd: Jon’s pal survived the battle of Castle Black, Hardhome and the fall of The Wall, but the battle of Winterfell looks to be his last stand.

Ghost: Finally reappearing in a blink-or-you-miss-it shot last week, Jon’s direwolf will surely pounce on some zombies before meeting his inevitable end.

Yohn Royce: Who? Exactly. (Royce is the leader of the Knights of the Vale that always hangs out in the background of a few scenes, but considering most viewers don’t know his name, his death looks imminent).

Viserion: We’re dying to see the Night King’s new pet go down for a second time.

The 80-minute episode will air on HBO this Sunday.