What the Night King Really Wanted on ‘Game of Thrones’ 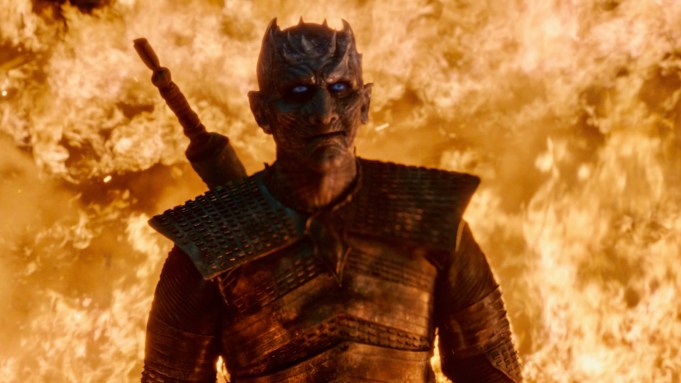 Up until Sunday’s episode of “Game of Thrones,” the Night King had never said a word and the show never fully explained his motivations.

After that shattering conclusion in which Arya stabbed the evil leader, causing him to disintegrate into a million pieces, we may never know why he wanted to annihilate the living.

However, Czech actor Vladimír Furdík the man behind all the makeup and prosthetics, told Variety that the Night King’s motivation is clear: “revenge.”

Furdík, who was previously a stunt man on the show and only started playing the Night King in season 6, revealed the white walker’s darkest secrets.

How did you score the role of Night King?

Easy, I picked up the phone, somebody said, ‘Hey Vlad, do you want to be the Night King,’ and I said, ‘Yes!’

What was going through your mind when you were playing the character?

With the costume and the makeup you already are the Night King, the makeup changes you, it helps you so much. Miguel Sapochnik [the director] also made the job easier for me. We had many discussions before in the office. Because I wasn’t an actor, he gave me a lesson on how to play. Afterwards my homework was to go to the hotel and cry in front of the mirror. He said, “I would like to see your tears, just play with your face.” He gave me many tests and directed me exactly where to go.

This character made your face infamous around the world.

I was so happy to have work, especially in this business. As a stunt man, many times directors asked me if I wanted to play small roles, until season 5, nobody knew how big this role was. It became bigger step by step, people started to talk about the Night King from season 6. Nobody knew how this character would grow up. Now we do.

Did you ever want to say anything on the show?

No, I don’t need to say anything because I kept running everything through my mind.

You just used your face to express things.

What did you think of this Sunday’s episode, it was a big one for you?

When I saw this I said, “Oh My god.” The music when I’m walking to Bran, it was amazing, I was so proud to be a part of this show. My daughter, she is very critical of everything I do, and she just said, “Wow, that’s unbelievable,” and she was very happy. She is always critical when I am a stunt man and fight, but if she loved it, for me that beats what anyone else says.

What was it like shooting that final scene with Arya?

This was one of the hardest days of my life. I did many difficult stunts, running through fire, many crazy things. But this moment with Arya when I grab her, and the emotions from Maisie were so strong, I felt like I spent all my energy that day. It was raining, it was cold, it wasn’t easy for Maisie to jump at the right time, it wasn’t easy for me to grab her at the right time, it was the most difficult thing to do in front of a camera.

Was Maisie the actor you were closest to on set?

Yes, Maisie was one of the first ladies who knew who I am, because many of the actors didn’t know. I did a couple of fights against some actors in a different costumes as a stunt man, but I prepared Maisie for the fight with the small sword and the big sword in the courtyard with Brienne, I spent hours and hours with her on that dance.

What do you think was the Night King’s motivation in the end?

It’s not a fun life.

He was like now I have a way to go to war. Now I kill everybody because you made me the Night King and made me live seven or 10 thousand years behind the wall in a cold country. He’s tired of living out there in the cold and the snow.