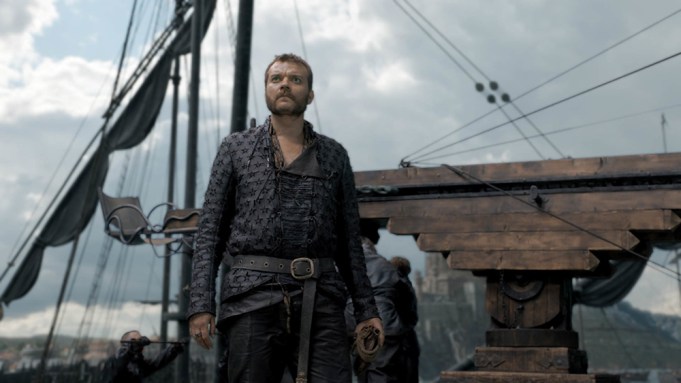 SPOILER ALERT: Do not keep reading if you have not seen Episode 5 of Season 8 of “Game of Thrones,” titled “The Bells.”

This week’s episode of “Game of Thrones” saw a multitude of major characters make their bloody exits from the show.

Pilou Asbæk, who plays the mad pirate king Euron Greyjoy, spoke with Variety about how he was a fan of the show long before signing on to star, what motivated his final showdown with Jaime Lannister, and whether he loves or hates Euron now that all is said and done.

Read the full interview below.

I died last night on “Game of Thrones” but I’m happy, and sad, but also happy.

What was your initial reaction to learning Euron was “the man who killed Jaime Lannister?”

Honestly, just because you say it doesn’t mean it’s the truth. I remember when we did the scene but I haven’t seen anything. Jaime gets away and goes to Cersei, right? So I might have added some damage to him which made him be very delayed and that’s the reason why he died, so I can’t claim it 100%. Let’s just say I claim 35%.

So Euron was full of it right up to the end?

Man, I’m not going to defend that character. I’ve tried a lot of different work and worked with a lot of different people. Some people love him, some people hate him, but I have to admit I had a hell of a good time playing him. He’s one of those characters that’s just fun. What do you want? “World domination.” Why? “I don’t know, because I’m a f—ing idiot.” He’s one of those guys that just likes to see the world burn. If he can help the world to burn, even better…That’s how 85% of all Bond villains are created.

Do you love him or hate him?

I love hating him. I was such a big fan of “Game of Thrones” before I became a part of it. It was a passion that became my work. Me and my wife would discuss every Sunday or Monday until I became a part of it. Then I didn’t want to discuss work when I’m home. Work is such a big part of our lives that when you’re home with your family you want to discuss NFL or soccer or whatever you want.

As a fan, what did it mean to be there at the very end?

It’s amazing. I feel like a lucky tourist. I feel like the little kid at the chocolate factory with a golden ticket. I might be a little unprofessional because I think one of the reasons I’m laughing and smiling in 95% of all my scenes is because on a private scale, I’m like, “Holy f—ing s—, I’m on ‘Game of Thrones’ motherf—er.” Honestly, that’s how I felt.

I think he loved Cersei. He really liked her. Love you have to play honest. I think that would be the most interesting conflict. I’ve always tried to do the scenes as if he likes her, but maybe I have to go back to acting school to make that a bit more clear to the audience.

So that’s why he decided to fight Jaime?

It’s because he doesn’t give a s—. He’s like your friend who is also the guy who steals your wallet. And that’s totally not the way he is in the book! In the books, he’s so radically different but that’s because it’s not possible to create such a conflicted character as he is in the books so late in the show.

Any plans to give up acting and take up piracy?

I might but I end up dying so apparently I’m not very good at it. I will say, I’ve made so many films and TV shows in Denmark and I’ve always been the hero. It’s been so much fun doing a villain, being the guy who is evil. I’ve truly enjoyed it. It’s liberating. Some people go to therapy. I do theater.