Continue to Variety SKIP AD
You will be redirected back to your article in seconds
May 12, 2019 7:43pm PT

‘Game of Thrones’: 7 Shocking Moments From ‘The Bells’ 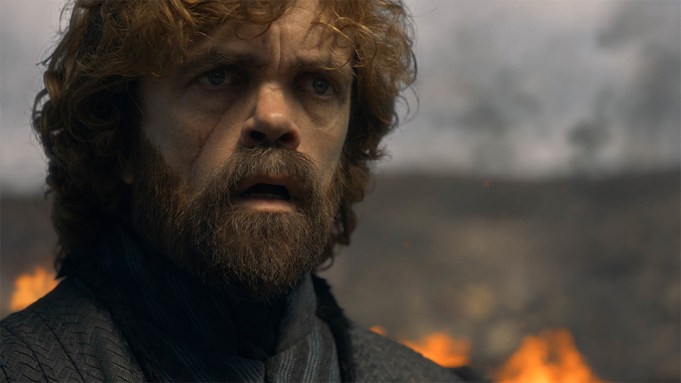 SPOILER ALERT: Do not keep reading if you have not seen Season 8, Episode 5 of “Game of Thrones,” titled “The Bells.”

Episode five of the final season of “Game of Thrones” was carnage from beginning to end. After last week’s episode, fans were wondering how Daenerys would ultimately take the execution of Missandei. The answer is not well.

Read on for some of the most shocking moments in this week’s episode.

After so much scheming, plotting and general back-stabbing, Varys met his end. He tried to elevate Jon to the Iron Throne; Daenerys found out; he got burned. You could say he had it coming. His little birds shall flutter no longer.

In the space of about five minutes of pure decimation and fire, Daenerys, with a little help from Drogon, made the much-vaunted Iron Fleet go up in smoke, and blasted the Golden Company to kingdom come. It’s hard to remember how much gold Cersei paid for their services, but whatever the figure, it’s fair to say she over-paid.

Jon, Grey Worm and Davos Get Their Reservoir Dogs On

In a moment which recalled the iconic walking scene from Quentin Tarantino’s classic, Jon, Grey Worm and Davos marched through the streets of King’s Landing like three cool dudes. All they were missing were some anachronistic sunglasses and black tie.

The Apple Doesn’t Fall Far From The Targaryen Tree

She thought about it…she thought about it…but in the end, Daenerys proved to be just as mad and cruel as her father. The Queen that had been promised indiscriminately butchered the innocent people of King’s Landing for what seemed like half the episode, leaving very little of a kingdom to rule over.

Jaime and Euron Wrestle It Out

Who knew that Jaime had a back-hand worthy of Roger Federer? The Lannister used his golden appendage to his advantage in taking out the petty, narcissistic Euron. The fight didn’t last long, and Euron managed to get a couple solid stabs in, but ultimately he should have probably stuck to sailing.

The fight that “Thrones” fans had been hyping for years finally happened, and it didn’t disappoint. In a back and forth match, which began with the Hound de-helmeting the Mountain to reveal that he was, in fact, Darth Vader, the former realized that the only way to kill the latter was to tackle him off the crumbling edge of the Red Keep and into a fiery precipice. We can call that one a tie.

When the brother and sister fled to the crypts of King’s Landing, they discovered that their final escape route has been blocked by the rubble caused by Daenerys and her dragon. As the ceiling crumbles around them and Cersei suddenly realized that bending the knee might have been a safer bet, Jaime takes her into his arms for one final embrace.