‘Game of Thrones:’ 8 Shocking Moments From ‘The Last of the Starks’ 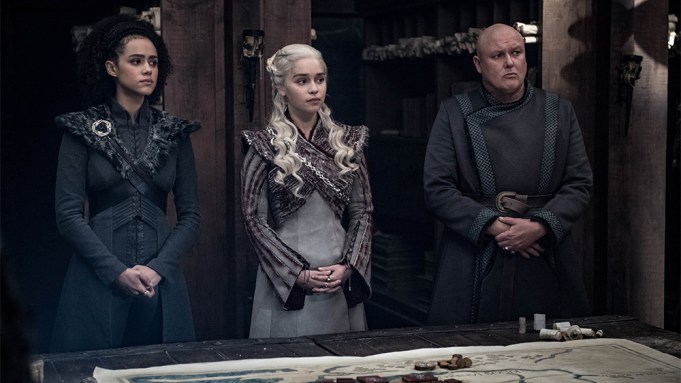 SPOILER ALERT: Do not keep reading if you have not seen Season 8, Episode 4 of “Game of Thrones,” titled “The Last of the Starks.”

Sunday’s episodes of “Game of Thrones” was a true doozy if ever there was one. After the events of last week’s episode — in which the armies of the Stark-Targaryen alliance defeated the Night King in the Battle of Winterfell — the victors were enjoying a well-deserved celebration. But as they seldom do on “Game of Thrones,” things did not stay happy for long.

Read on for some of the most shocking moment’s in this week’s episode.

A question that has no doubt had fans up nights with worry: Did Jon’s direwolf Ghost survive the Battle of Winterfell? Luckily, this week’s episode answered the burning question. Ghost was seen standing along with the other survivors of the battle in the episode’s opening scene as they prepared to burn the bodies of the fallen, including Ser Jorah and Theon. In a touching moment, Sansa placed a pin bearing the Stark sigil on Theon’s body, reaffirming his place as part of her family. Ghost’s ultimate destiny is to live north of the Wall, as Jon sent him with Tormund Giantsbane back to live in “the real North.”

Gendry is walking out of the main hall at Winterfell when he is spotted by Daenerys. Daenerys is aware that Gendry is Robert Baratheon’s bastard, and also that the Stormlands — home of House Baratheon — is without a lord. By royal decree, she officially dubs him Gendry Baratheon and the new lord of the Stormlands. Not bad for a bastard blacksmith from Flea Bottom.

After naming Gendry a lord, Tyrion astutely points out that now the boy will be loyal to her going forward, assuring the allegiance of the Stormlands and their armies. Sansa takes all this in as well. It served as a pointed reminder that despite the victory over the army of the dead, the war for the Iron Throne remains as serious as ever. Things get even more tense when Daenerys demands that Jon never reveal his true parentage to anyone. But Jon cannot lie to his family, telling Arya and Sansa, the latter of whom eventually tells Tyrion.

Gendry’s rush from being named a lord no doubt came crashing down after he talked to Arya. He seeks her out after speaking with Daenerys, finding her practicing her archery as anyone would do after slaying the ghostly leader of an army of undead about 24 hours prior. Gendry tells Arya he wants her to be his wife, to rule by his side as lady of the Stormlands. Arya kisses him before telling him, “I’m not a lady. I never have been. That’s not me.” Later in the episode, she joins The Hound in riding south.

Jaime and Brienne Sitting in a Tree

After a long night of drinking — during which Tyrion deduced that Brienne is a virgin — Jaime shows up at Brienne’s door with more wine. They talk before eventually undressing each other. They proceed to have sex, and somewhere, Tormund Giantsbane’s heart broke into a million little pieces.

Rhaegal, one of Daenerys’ two remaining dragons, was killed in an ambush by Euron Greyjoy and his fleet. Daenerys and a portion of her remaining army were sailing to the island of Dragonstone when Euron and his men shot the dragon out of the air using the ballistae Cersei commissioned last season. In addition, Euron also destroyed several of Daenerys’ ships and took Missandei captive.

When Jaime hears what Cersei has done, he decides he must ride south. Brienne pleads with him to stay, telling him he is a good man. Jaime responds by rattling off all the terrible things he has done in the name of his family and his sister-lover before mounting his horse and riding off.

Meanwhile, in King’s Landing, Cersei tells Euron that the child in her womb is in fact his. But as the recap at the beginning of the episode reminded fans, she had promised Jaime that she would tell the world the child was his, taking their love public. But Cersei, ever the opportunist, misses no chance at securing Euron’s loyalty all the more.

Daenerys, her remaining dragon, and a small contingent of Unsullied approach King’s Landing to demand Cersei’s unconditional surrender. Cersei, of course, has the captive Missandei purched on the edge of the city’s battlements and is ready to push her off unless Daenerys surrenders. After exchanging a few words with Qyburn, Tyrion approaches the walls directly and speaks to Cersei, playing on her love for her children to implore her to avoid bloodshed. Instead, Cersei asks Missandei if she has any last words. Missandei boldly says “Dracarys,” essentially telling Daenerys to burn the city, before The Mountain cuts her head off.