‘Game of Thrones’ Review: A Spectacle of Fire and Ice 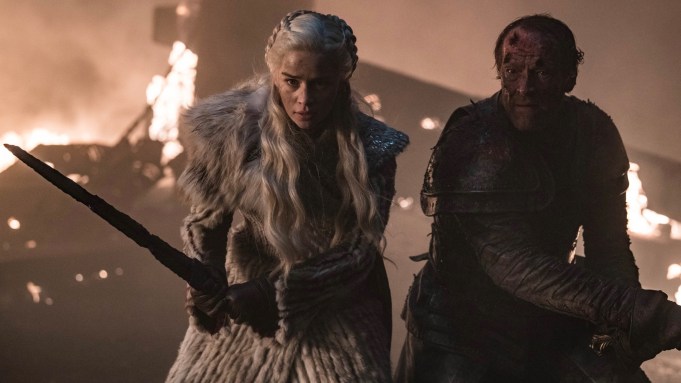 The so-called Battle of Winterfell was, perhaps, the culmination of the path “Game of Thrones” has trod over its past several seasons; a show that has grown relentlessly in scope, dazzle, and cruelty reached its apotheosis in some eighty-plus minutes of slaughter and dragon-flight that forced characters through a gauntlet whose punishing nature was the point. (We in the audience marvel practically as much at the actors, clearly enduring a challenge unlike any other in the TV industry, as we do at the valiant characters.) In its exuberantly nihilistic willingness to push past the point of viewer discomfort — building from a starting point of extreme intensity to an exhausted, burnt-out stagger towards the finish line — the episode stands in as the ultimate representative of one of the ways “Game of Thrones” has seen itself, as the staging-ground for ultra-violent action whose stakes are the fate of the world.

But that’s not the only “Thrones” that exists. And, indeed, there are to be three more episodes of some other series, one in which the series’s most existentially pressing question, the fate of the world in the face of the encroaching Night King, has been settled. In a moment of catharsis at episode’s end, Arya — the mortal character on the series most particularly obsessed with violence — killed the avatar of Death, seeming to settle a question that’s stalked the show’s characters since the show’s earliest days. This would also seem to foreclose future action on quite such an apocalyptic scale: It’s hard to imagine Cersei’s armies, fearsome as they are, representing as photogenically gruesome an opponent as a squad of zombies who can reanimate at will.

That’s why what may be the passing of one “Thrones” era is as exciting as it is — more exciting, certainly, than much of an episode that tended to spare any top-billed character, preserving the ensemble but reducing the stakes as the viewer got wise to what was going on. The show promises to return to the entity it had been at its best: A story of palace intrigue and political and military grappling with an aroma of magic, rather than a story in which politics and military strategy are blotted out by the most powerful magic imaginable. (But for a hail-Mary by Arya, there was to have been no defeating the Night King, and thus everything Daenerys, Jon, and company tried was very well-shot wheel-spinning.) An avenue of the story seems to have been closed off, with the overwhelming presence of apocalyptic magic having been so well and truly eliminated as to have obviated the need for Melisandre in the story, resulting in her strangely moving walk away from Winterfell and towards her own death. And we can return to a core narrative about the battle for control of Westeros, both before Cersei’s presumed defeat and after, as onetime allies divvy up the spoils.

That’s what can be assumed, anyhow, based on the notion that the Night King is definitively dead (an assumption that runs up against the frustrating fact that within the story, his powers were effectively limitless — but we did watch him crumble and his zombies collapse). And it rhymes with the historical oddities of structure of “Thrones,” a show that has tended to drop its big narrative bombs before season finales and to spend the final hour or so cleaning up and tying a bow on the narrative. Three more episodes seems like an appropriate about of post-Night King time to close out the narrative, and it represents an exciting opportunity to resolve what have always been the most satisfying aspects of the story. To wit: Cersei’s absence from the series for two consecutive episodes has been keenly felt, and the degree to which dialogue fell off between the balefully verbose episode 2 and this one presented a contrast. There was, first, a show at its very best-written and, this week, a show relying on spectacle to carry the day.

But what spectacle! The deus ex machina of Arya’s attack satisfied in both its culmination of a seasons-long build (her development into a master killer) and its tension-exploding suddenness. The drop-off of dialogue, if we stipulate that it must have happened to convey all the action the show insists on delivering, was underscored with painfully sad piano music, broken and soft where much of the show’s action scoring has been triumphant and bold. And fire and fog lit and darkened the sky in dazzling measure. One talking point about the show as it aired that didn’t resonate with this viewer: The darkness of the cinematography. The degree to which it was at times hard to make out images seemed rather the point, as we experienced along with characters the (very literal) fog of war, so smothering as to confuse the flight paths of Daenerys’s dragons and to convert dead and living alike into faceless masses battling for survival. This show originates from source material deeply interested in point-of-view — the novel is told through close narration depicting characters’ vantage points, with all the flaws in understanding that entails. The muddle of war struck me as deeply within that tradition.

But cinematography alone shouldn’t have to carry that burden. Characters’ realities also emanate through their words and through their stated political positions. “Game of Thrones” has delivered a major action set-piece, but the real action to come is a war of minds, to be waged among all the show’s remaining players, not just the ones with swords. For all that the visual grandeur and expense of “Thrones” have changed TV, that upcoming show, the political drama that hinges on, well, gamesmanship, is the one that has defined a TV decade.