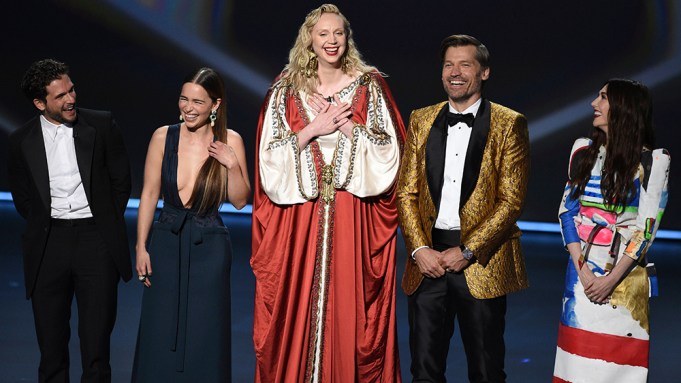 Your mileage may vary, as they say, but let’s stipulate that the final season of “Game of Thrones” was a huge disappointment to viewers, many of whom loudly expressed their displeasure on the Internet about what a damn mess it was. And, sure, many shows in Emmy’s outstanding drama category this year were better television. Personally, I preferred “Better Call Saul,” “Bodyguard” and “Pose” to season eight of “Thrones” — and when you throw in fellow HBO competitor “Succession,” there’s no contest.

But of course “Game of Thrones” deserved to win outstanding drama for its final run!

After the fantasy drama — based on George R.R. Martin’s “A Song of Ice and Fire” novels and adapted for TV by David Benioff and D.B. Weiss — premiered on HBO in 2011, “Game of Thrones” soon became the most watched show on television (among the networks that report ratings). And before Sunday night, it had already won three Emmys for outstanding drama. It was such a given the show would win that Benioff and Weiss mostly turned to the horde of actors and producers behind them, barely speaking into the microphone.

“It is amazing that all of you are still alive,” said Weiss.

“Game of Thrones” — with its huge budgets, dozens of named characters and geographical sprawl — also showed what ambitious event television could be. With the streaming battles coming our way, those competitors that want attention and success will need to rise to its scale. It created the scale!

But more than anything quantifiable, every season of “Game of Thrones” proved to be a massive communal event during which audiences came together to discuss fan theories, mourn characters who died and argue about the show’s depiction of race and rape and Ed Sheeran. The show’s final season, with its wild and incoherent narrative swings, provided perhaps the most interesting conversations of all — not since college have I found myself talking so much about fictional characters’ psychologies and motivations. Congratulations to us, we all survived the Dany wars!

And, yes, the final season of “Game of Thrones” barely resolved any of the mythological puzzles it had set up and betrayed a good number of its characters (not only Dany, but Cersei, Jaime, Brienne, Tyrion, Varys — whew, everyone, maybe!). It was as if the show just stopped caring, to be honest. But millions and millions of us got together and talked about it like we were watching “ER” in 1994 or something and there were only four TV networks.

No, it was not the best, but it was indeed outstanding. I miss “Game of Thrones” already.