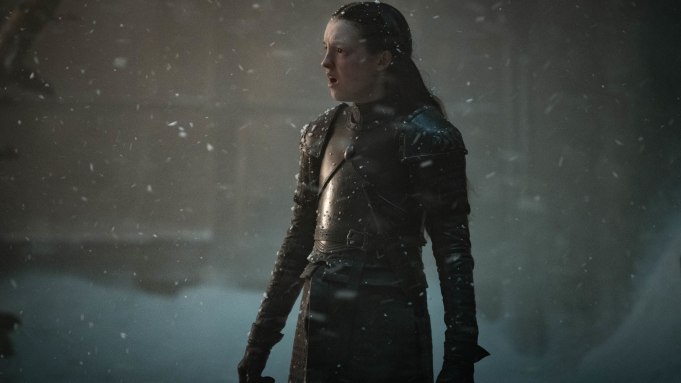 In last night’s episode of “Game of Thrones,” Lyanna Mormont — played by Bella Ramsey — once again stole the show and proved, for the last time, that standing up to giants is what she does best.

While other soldiers fled in terror from the dead giant, Lyanna charged at the massive beast head on. The giant tragically crushed little Lyanna to death, but not before she stabbed it in the eye with a dragon glass dagger in a moment which likely caused “Thrones” fans across the world to punch the air.

As Ramsey told Variety, if you’re going to die on “Game of Thrones,” bringing a giant down with you is “not a bad way to go.”

Ramsey also broke down how that epic sequence was shot.

“I was in a big claw machine, it was like a robot, it was programmed to do certain moves, to shake me about and simulate being lifted up by a giant, so that was intense,” she says. “I was very high, maybe 20 foot up in the air, and I had the dragon glass in my hand and the eye of the giant was actually a green polystyrene ball.”

She recalls the specific piece of direction that the episode’s helmer, Miguel Sapochnik, gave her just before they shot the giant scene.

“He said someone removed Lyanna’s fear gene, so fear isn’t part of her vocabulary, isn’t one of the emotions that she feels. We really talked about that and how she would react to the giant and what’s going on in her face and in her mind. It was sheer determination and courage that she wasn’t intimidated by this giant, this was just another object to face in the battle,” she says.

For shooting the exhausting, frantic battle sequence, Ramsey says one of the stunt coordinators decided to surround her with stunt men to make sure she wouldn’t get caught in the stampede of extras and rushing bodies.

“Lyanna’s there to kill a giant, not to get stamped on by extras, so the we took extra precautions. I’m glad they did because it was very intense,” she says.

The “Game of Thrones” cast is full of acting legends and veterans, from the great Sean Bean to the powerful Lena Headey. But for Ramsey, joining the show in season 6 as Lyanna Mormont was the first time she had ever been on a set in her life.

“I was thrown in at the deep end which was a good thing, I liked that it was challenging,” she said.

Ramsey and her character quickly became a fan-favorite famous for her bold speeches and for standing up the older men in the room who think the know better.

The actress says that several of her co-stars, including Kit Harington, Liam Cunningham and Sophier Turner, helped her settle in on set.

“Kit really helped, as well as Liam, who’s Davos, and Sophie, they all helped me in season 6 because that was the first thing I’d ever done, it was completely new to me, all the vocabulary, it’s a whole new language and they were very supportive,” Ramsey said.

Harington even gave her a piece of advice that she says she’ll remember for a long time to come.

“I was talking to him after filming, and I was asking him about interviews because they don’t naturally to me, acting is what I do and they don’t come naturally,” she explains. “He said to me, ‘Just to be yourself and tell the truth,’ and that’s something I’ve found very useful and try and do in every interview.”

Now that Ramsey has to bid farewell to her character, she can look back at an incredible run on the show which has catapulted her to international fame and has cemented her place as one of the most beloved characters on “Game of Thrones.”

“I still don’t believe it really, I still can’t comprehend how people have received Lyanna and received me, I’ll be forever grateful for that,” she says. “Im still in shock that people liked my performance and what I did.”