Continue to Variety SKIP AD
You will be redirected back to your article in seconds
Apr 15, 2019 1:28pm PT 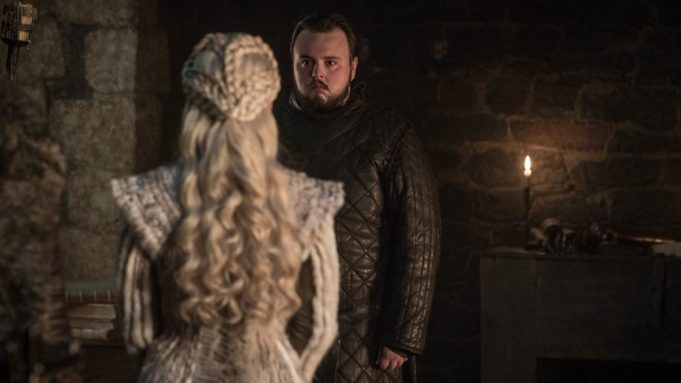 The actor attributes his insomnia partly to jet lag, and partly to nerves. The eighth and final season premiere was a monumental episode for his character, Samwell Tarly, for more than one reason.

In the latest episode, Sam found out via the ever-tactful Daenerys Targaryen (Emilia Clarke) that his father and brother had been burnt to a crisp for refusing to bend the knee, and then had to reveal to his best mate Jon Snow (Kit Harington) that he’s not a Stark bastard after all, but a Targaryen, and therefore the true heir to the Iron Throne. One can forgive Bradley for being a little nervous.

“It’s hard to huddle up in your little bed and know that you’re being watched all over the world at that exact moment,” Bradley told Variety Monday morning. “It feels like I’m hungover. It feels like New Year’s Day. You’ve been waiting for it for so long, and the day after you just don’t know how to feel.”

In one of the episode’s final scenes, Sam stumbles down into the Winterfell crypts, still in complete shock about what has happened to his family, but determined to tell Jon the truth about his parentage. Bradley says he and Harington ran through their lines over and over for several days in advance of filming, so as not to “trip up” or “hit a stumbling block” on the day.

He reveals that he broke the scene down into two parts in his head.

The first was the reunion of two old friends, with Sam telling Jon about the fate of his late father and brother. “He just understandably needs to get that off his chest,” Bradley says.

The second part was the revelation that fans have been waiting eight years and seven entire seasons for — a revelation that Bradley quite rightly calls “the most important piece of information in the entire show.”

“From a performance point of view it was very delicate, because I know I had to get all of the emotions into the first half of the scene, and in the second half abandon them,” Bradley says. “Sam has to calm himself down and explain the situation to Jon very calmly and in terms which are easy to understand. He knows Jon is going to be angry, he knows any blasphemy against the sainted figure of Ned Stark is going to rile Jon up. Sam needs to be as calm as possible to throw a cold blanket on that, to make Jon listen to what he has got to say.”

Bradley’s intense scene with Daenerys, in which she divulges that things got a little too heated between her and his father, Randyll (James Faulkner), and his brother, Dickon (Tom Hopper), was the actor’s first time working opposite Clarke.

After seven seasons of “watching her like a fan,” Bradley says working with Clarke “was a true joy,” and allowed him to contrast the cold, matter-of-fact manner in which Daenerys delivers the news with Sam’s devastation.

“I wanted it to be as uncomfortable a viewing experience as possible,” Bradley says.

While it may feel like every single scene from here till the very end of “Thrones” will be seeped in drama and import, Bradley says there are still “plenty of lighter scenes” to come, and he wants to reassure worried fans that the show will stick its final landing.

“It’s an ending that we’re really satisfied with,” he says. “We’re not afraid to talk about it, we’re not dreading people seeing it or how they’re going to react. Quite a few shows have been great and then missed on the finale, and that’s tarnished people’s relationship with the show, but we’re not going to do that. Ever since I first read that last page of script, the last page of Season 8, Episode 6, I have been desperate for people to see it. I’m gonna feel that way the second before it starts in five weeks time. It’s gonna give the fans and the show itself the ending they deserve.”