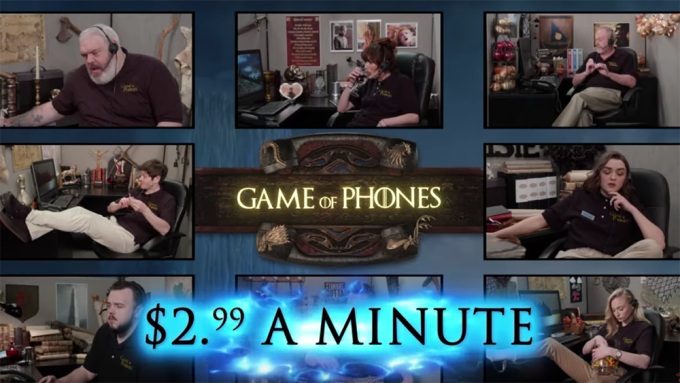 Need help remembering the plot points of past “Game of Thrones” seasons? Jimmy Kimmel has you covered.

On Monday night’s episode of “Kimmel Live,” cast members from “Game of Thrones” assembled for a sketch advertising a service called “Game of Phones,” in which viewers can telephone “Thrones” actors with questions for their characters. Sophie Turner, Lena Headey, Maisie Williams and more manned fictional phonelines to answer queries. Their responses weren’t always factually correct, however.

“No one did, it turned out to be a bad clam,” Turner claimed, when asked who killed Joffrey — it was actually Diana Riggs’ Lady Olenna Tyrell.

Some of the questions were specific to their on-screen characters, such as when Headey was asked what to do if one has a crush on their brother.

“Nothing, it’s illegal and immoral to act on those feelings. On the other hand, if he’s hot, go for it,” she said.

The advertisement included a banner at the bottom with the phone number 1-800-720-0622 and advising that callers must be 18 years of age or older.

“A small but diabolical clause in their HBO contact requires them to man our phone banks,” a voiceover claimed. “And cut George R.R. Martin’s lawn.”

The voiceover also detailed that the calls cost $2.99 per minute or $5.99 per raven and that bankers “no habla dothraki.”