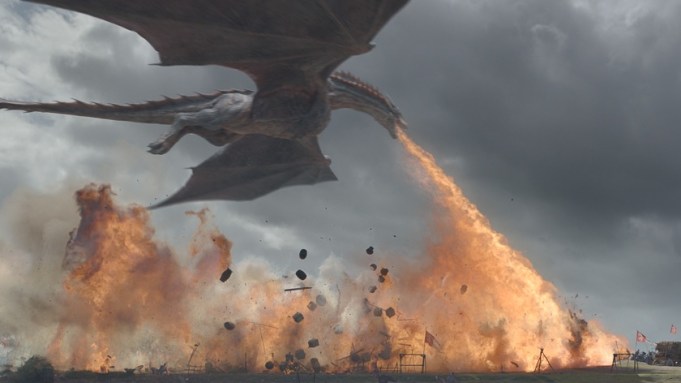 Even as “Game of Thrones” returns on Sunday night for its final season, the dispute between HBO and Dish keeps dragon on. In order to pacify “Thrones” fans who are also Dish subscribers, the satellite provider has taken the unconventional approach of directing customers to how they can separately sign up for HBO Now.

Dish’s website features a page devoted to explaining the process to signing up for HBO NOW, the premium cabler’s streaming service that Dish explains “is similar to Netflix.”

“Even though HBO is not available on Dish, you can still watch their content with the HBO NOW app,” a tutorial video explains on Dish’s website. “It only takes a few minutes. Click, start your free trial, then just follow the on-screen instructions. Now, you’re ready to start watching HBO shows and movies, including ‘Game of Thrones,’ when you want, where you want.”

It’s an unusual call to action by Dish, which doesn’t get a dime should its customers sign up for HBO that way. But it’s also an attempt to placate customers by pointing out they can stay with Dish, even though it doesn’t currently offer HBO, and yet still watch the channel. Dish blames most of the standoff on AT&T, which owns rival DirecTV and took over HBO when it completed its purchase of Time Warner (now WarnerMedia) last June.

Prior to the standoff, Dish charged monthly subscribers $15 for HBO and $10 for Cinemax. As Dish notes on its site, “HBO typically has offers including a 7-day free trial and a cancel anytime policy; monthly subscription is $14.99 billed through HBO.”

HBO hasn’t been available to Dish or Sling TV (Dish’s over-the-top live TV service) since November, when the two sides couldn’t come to terms on a new carriage deal.

The standoff comes at a tough time for Dish, as traditional cable/satellite providers continue to shed video subscribers. Dish lost 1 million subs in 2018 — including 334,000 in he fourth quarter, which it blamed on the company’s carriage disputes with HBO and Univision.

Dish finally struck a new deal with Univision last month, ending a nine-month blackout. But its standoff with HBO, now in its fifth month, shows no sign of resolve just yet.

The dispute is a familiar one in cable, as carriage fee disputes frequently lead to channel blackouts. But they rarely last as long as this has, and neither side seems to have budged. HBO declined comment, while Dish sent a boilerplate statement: “AT&T removed HBO from DISH and has refused to accept any offer that could realistically be considered fair for DISH customers. DISH customers are not being charged for HBO. Given HBO’s broad availability, DISH is working on a case-by-case basis with our loyal customers regarding their viewing needs.”

But now Winter Is Coming. Specifically, there’s so much attention and buzz surrounding the final “Game of Thrones” season that even Dish chairman Charlie Ergen said in a February earnings call that “realistically you would expect that when Game of Thrones comes on you may see a pickup in defections from HBO.”

Ergen added that Dish customers may find other ways to watch “Game of Thrones”: “They’ll go to their friend’s house for 10 weeks during ‘Game of Thrones’ or there becomes an increased usage of – every young person knows how to go on the internet and get a code and watch HBO for free.”

The exec even suggested that piracy may increase due to some Dish users not having access to HBO, something “we prefer not to see.”

Despite Dish’s drive to send its “Game of Thrones”-loving customers to HBO NOW, HBO isn’t expecting to see a frenzy of sign-ups. One insider said that’s because they haven’t historically seen a spike in HBO NOW subscribers when “Thrones” returns (perhaps because the show, entering its seventh season, is already well-established).