‘Game of Thrones’ Star Gwendoline Christie: Brienne ‘Let Her Armor Down’ With Jaime 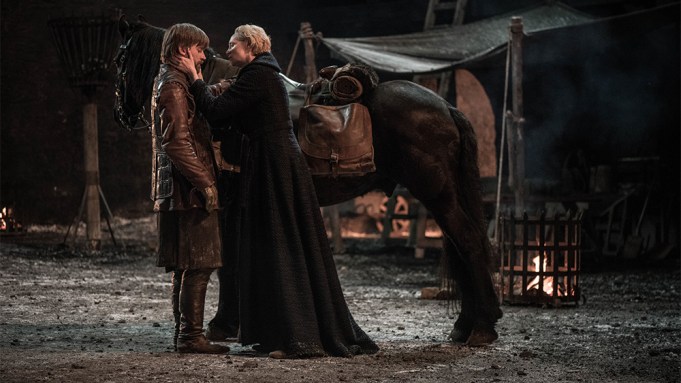 SPOILER ALERT: Do not keep reading unless you’ve seen “Game of Thrones” Season 8 Episode 4, titled “The Last of the Starks.”

For Gwendoline Christie, one of the most enjoyable parts of being on “Game of Thrones” has been “kicking ass.”

Certainly Brienne of Tarth has kicked her fair share over the last eight years, and when it comes to her character’s journey for the final two episodes, Christie tells Variety that Brienne “looks forward to doing more of it in the future.”

When asked if the newly anointed Knight of the Seven Kingdoms will ride South after Jaime, Christie simply says, “It’s just such an exciting show to watch, isn’t it?” before cackling manically.

Over last three episodes, audiences have been treated to an entirely different side to the usually stiff, fearsome Brienne.

On the tender sequence with Jaime, in which Brienne lost her virginity and delighted fans who have long been rooting for her character and the Lannister knight, Christie says she “loved that it was Brienne’s choice,” that her character had finally committed to being happy.

“She has let her armor down,” she says. “It was essential for the character to evolve beyond what we’d seen so far, which was her strength and ability at fighting and physical combat. We get to see something else of this woman’s emotional world and how she’s developed over the years.”

Christie recalls shooting the emotional moment in which Jaime leaves Brienne and rides South to deal with the Cersei situation (how he’ll deal with that, we don’t know), which happened to be her final scene shooting in Belfast on the Winterfell set, the place where it all began for her.

“I remember I went to do my stunt training and horse-riding training and that’s where the character was first born. It’s where the relationship with Nikolaj Coster-Waldau first developed. That day it meant such a great deal because I’m looking around at the crew — some of whom I will not work with again on ‘Game of Thrones’ — I’m looking at that set which I will not film on again, and it’s been an experience that has changed my life beyond all comprehension and afforded me an acting career,” Christie says.

She adds that it was a relief to finally shoot a scene in which she wasn’t wearing “beautifully designed but excruciating armor.” Brienne’s sleeker house coat will be on sale online soon, Christie jokes.

At the end of her final day on set, Christie says showrunners David Benioff and D. B. Weiss gave a speech and paid her a compliment which made her “cry for two hours.” She says the end of Brienne’s story on the show feels like a “natural conclusion.”

“Brienne really made me examine the parts of myself that I thought needed to be concealed, that I felt that society was telling me weren’t good enough,” Christie says. “I was embarrassed to confront my androgyny, or my strength, or my masculinity, and what I felt about female empowerment and gender politics and the inconsistencies in my body and face. I was forced to confront all of those things to get into the character and that has been a great gift.”