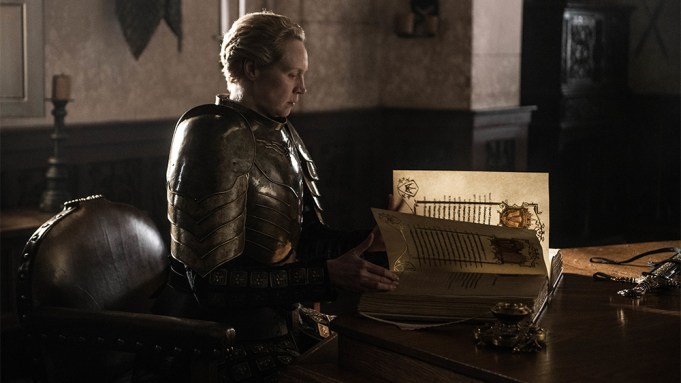 SPOILER ALERT: Do not keep reading if you have not finished Season 8 of “Game of Thrones.”

Gwendoline Christie has been a part of “Game of Thrones” since its second season, with her Brienne of Tarth crossing paths with key characters at seemingly every turn.

Christie spoke with Variety in the wake of the series finale, which she said left her “very emotional.” She also discussed her many scenes with Nikolaj Coster-Waldau and the kindness she showed him in the series finale, as well as what surprised her most about Brienne’s storyline.

Read the full interview below.

How are you today?

I am OK. I’ve been in rehearsals all day and I watched the finale last night. I feel very emotional about it.

So now that you are officially done with the show, how does that feel?

I stand in awe and gratitude of everything that the show has given me. I thought it was an astounding experience to be a part of. I really enjoyed the final episode. I can’t quite believe I have dedicated eight years of my life to something that has been so loved and people have been so passionate about. I feel a great sense of loss now that it is over, but an immense sense of gratitude that any of it happened in the first place.

What surprised you the most about your storyline?

What I loved and what surprised me the most is that Brienne got what she wanted. She was made a knight and then a member of the Kingsguard. To be commander of the Kingsguard was what she wanted from the very first moment we saw her in Season 2. She wants to be part of Renly’s Kingsguard, so she bests the Knight of the Flowers — played by the glorious Finn Jones. It surprised me she ended up receiving that. It also surprised me that she ended up travelling all the way through the series to the final episode and being a part of the future of Westeros.

You got to work with Nikolaj Coster-Waldau quite a bit. What are some of your fondest memories working with him?

It’s been absolutely fantastic to work with him. He is an extremely modest actor and he really puts everything into the scenes. He is so dedicated and so committed to every moment. He does it with a real lightness but a very deep complexity. I hate saying this, but I’ve learned so much from him (laughs). I’ve thoroughly enjoyed every moment of working with him, even when it has been spitting frustration over how impossible he could be. It was always with real fun and joy. It’s rare to work with an actor who is so invested in making a character and a relationship live, and that is great fun to immerse yourself in for a long period of time. It means the characters can grow and grow together. It really was a master class, because he’s been acting for a very long time, much longer than me. It was the most sparkling fun.

Why do you think it was important for Brienne to write Jaime’s story in the annals of the Kingsguard?

What I thought was interesting about that scene was Brienne has achieved the position of commander of the Kingsguard and she decides to take the higher ground. She uses her power in a positive way, in the way I feel Brienne has always done, to look beyond the surface of who someone is and to examine their deeds and morals. I think what she did was perform an act of respect for someone whom she did love.

Now that the show is over, how would you like it to be remembered?

I’ve always been very aware, due to the structure of the books, that though this was an episodic series, it really wasn’t that. It’s format was something much longer. It’s arc was much longer than season by season. It was always part of moving towards and embodying an overriding idea that was a long, sustained idea. The show is based on this 1400’s view of the world and is loosely based on the War of the Roses, and it has held up a mirror to humanity and has done some interesting things along the way. What I think we see in the culmination of the series and the final episode is that it’s been about examining humanity and all of its flaws. It’s about the fact that people don’t always win and things don’t always turn out well. That is the mystery and complexity of life. Life is very inconsistent and all we can do is learn from the stories of the past and correct our future.