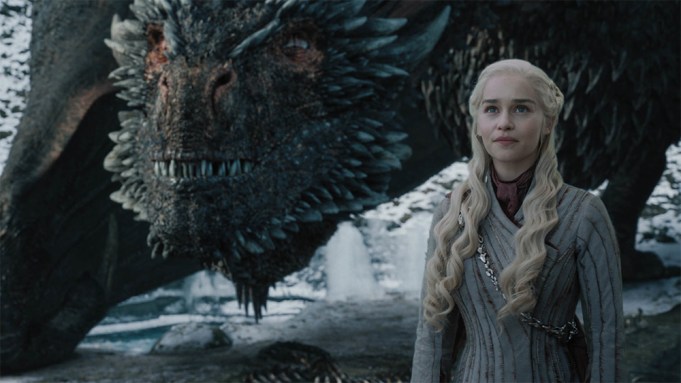 The Mother of Dragons is saying goodbye.

After portraying Daenerys Targaryen on “Game of Thrones” for the better part of the past decade, Emilia Clarke penned a heartfelt farewell ahead of the series finale.

“Finding the words to write this post has left me overwhelmed with how much I want to say but how small words feel in comparison to what this show and Dany have meant to me,” Clarke wrote on Instagram hours before the show’s final episode airs on HBO. “The mother of dragons chapter has taken up the whole of my adult life.”

Clarke had only appeared in small TV and film roles before she became known to the world as Khaleesi,  Breaker of Chains, and Mother of Dragons. The 32-year-old actress was in her early 20s when she was cast in the risky fantasy drama based on George R.R. Martin’s book series “A Song of Ice and Fire.”

“This woman has taken up the whole of my heart,” she continued. “I’ve sweated in the blaze of dragon fire, shed many tears at those who left our family early, and wrung my brain dry trying to do Khaleesi and the masterful words, actions (and names) I was given, justice.”

Clarke, who received three Emmy nominations for “Game of Thrones,” lost her father to cancer in 2016, just as the show’s seventh season began airing.

“‘Game of Thrones’ has shaped me as a woman, as an actor and as a human being,” she said. “I just wish my darling dad was here now to see how far we’ve flown.”

Despite her character’s darker arc toward the end of the eighth and final season, Queen Dany has remained a fan-favorite over the course of the series.

“But to you,” she concluded, “dear kind magical fans, I owe you so much thanks, for your steady gaze at what we’ve made and what I’ve done with a character that was already in the hearts of many before I slipped on the platinum wig of dreams. Without you there is no us. And now our watch has ended.”

“Sansa, Thank you for teaching me resilience, bravery and what true strength really is,” Turner captioned a cast photo. “Thank you teaching me to be kind and patient and to lead with love.”

Like Clarke, the 23-year-old Turner has spent a significant portion of her life on the set of “Game of Thrones.”

Turner also gave a shoutout to her fellow cast and crew members.

Jacob Anderson, who plays Grey Worm, a trusted adviser of Danerys, called his six-year run on the show “the craziest school trip ever.”

“Grey Worm. You went from a robot to a real boy. I’m proud of you. I’ll miss you bud,” the actor wrote on Instagram. “Thank you to everybody that cared about him and rooted for him. He was really scared at first, but you made him feel loved. He appreciates it. I asked him.”