‘Game of Thrones’ Cast on Series Finale Backlash: ‘It Was Always Going to Be Bran as the King at the End’ 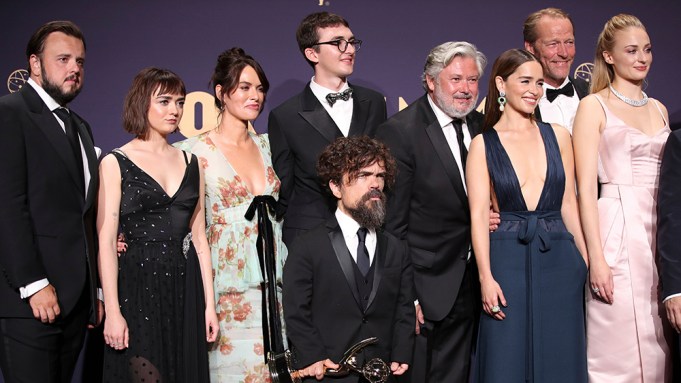 Fresh off their Emmy win for outstanding drama series, the “Game of Thrones” cast opened up about their feelings on the series finale and the backlash they had faced from fans.

On closing the show after its eight season run, actor Peter Dinklage said he’d had a tough time closing this chapter of his life. “I’ve seen a doctor about getting him out of me. The doctor said that’s hopeless,” Dinklage joked after winning the Emmy for supporting actor in a drama series. “It was 10 years of my life. A lot of us had children, a lot of us were children when we started but now we’re beautiful grown-ups like Conleth.”
“It was always going to be Bran as the king at the end,” David Benioff said of the series ending while backstage at the 71st Primetime Emmys.
Following the HBO drama’s finale in May, many fans took to social media to express their frustration about the claimant of the Iron Throne.
“It’s not really up for us to decide what people feel about it. We hope that they watch it and like it in the future. There’s no way to tell,” showrunner D.B. Weiss said. “The landscape of television changes so quickly; it’s changing right now as we’re standing here. It’s so gratifying to have reached this many people. We hope the people who are a little bit too young will grow up to watch it as well.”
Fellow cast member Kit Harington also spoke out about the controversy the show faced, saying he never watched the closing episode. “I haven’t seen the final season,” the former Jon Snow said. “But I know what it took to shoot it. It was hard and everyone put all of their love and effort into it. We knew what we were doing was right, story-wise. We knew that it was right for the characters because we’d lived with them for 10 years. Controversy for us didn’t really affect us.”