‘Game of Thrones’: Burning Questions Before the Series Finale 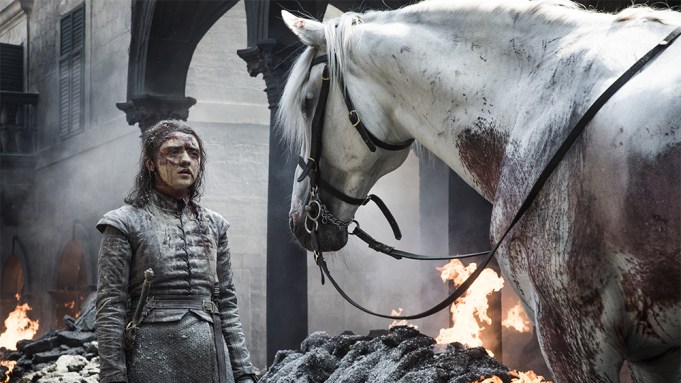 SPOILER ALERT: Do not keep reading if you have not seen Season 8, Episode 5 of “Game of Thrones,” titled “The Bells.” This is your final warning.

The penultimate episode of “Game of Thrones” was a fiery affair.

King’s Landing lies in ruins with much of its population decimated, and multiple major characters are among the dead. “The Bells” had a definite feeling of finality about it.

However, the are still plenty of burning (too soon?) questions going into the series finale, with the Iron Throne still very much up for grabs.

Is there anybody left to rule?

Episode 3: Death shall rain down upon Westeros.

In this week’s episode, Daenerys (Emilia Clarke) decided to forget all of that “I’m here to save my people” nonsense, and instead rained fire and death down on the innocent civilians of King’s Landing. However, as several of her trusted aids and lovers/nephew previously pointed out, that course of action would appear to have left her with very few subjects left to rule over. It’s all very well being Queen Daenerys, but it’s quite difficult to bend the knee and kiss the ring when your potentially loyal followers are dead.

Are Jaime and Cersei really dead?

Jaime (Nikolaj Coster-Waldau) and Cersei Lannister (Lena Headey) were crushed to death by the falling rubble from the Red Keep in one of the episode’s dramatic final scenes. Or were they… It would seem an odd end after eight seasons of character development and excellent acting from Headey and Coster-Waldau to have them perish under a hail of massive stones, as opposed to dying at the hand of Arya Stark’s (Maisie Williams) knife or Daenerys’ dragon. Are they really dead? Is Tyrion now the only Lannister with a pulse? Will Cersei and Jaime never get a fourth try at being good parents? Guess we’ll have to wait until next weekend to find out.

Will Jon end up killing his mad auntie?

Daenerys took a leaf out of her father’s book and brutally scorched her own people to death in episode 5. In the few shots we saw of Jon, he didn’t look too pleased with his lover’s decision-making. Surely in the final episode he will have to either give her a stern talking to, or a devastating knife through the heart? We’d bet on the latter. Unless Arya gets there first…

Will Daenerys show any remorse?

At some point, Daenrys will be done burning her capital city to the ground and butchering its population. When she’s perched atop the rubble of King’s Landing, looking over the destruction and the bodies, will she feel bad about it? Will she see that maybe heading straight for Cersei in the Red Keep should have Plan A? Probably not.

When will Sansa march South to claim her rightful throne?

This question speaks for itself. It’s fair to say that Daenerys’ actions in the last episode mean that she’s no longer the people’s queen. That title now (and arguably for the last few seasons) belongs to Sansa Stark (Sophie Turner). She tried to warn Jon of what Daenerys was capable of. He ignored her, and look what happened. Jon has some serious humble pie to eat, and if he really doesn’t want the Iron Throne, as he’s oft repeated, Sansa seems to be the only sensible and qualified candidate to rule the Seven Kingdoms.

Where’s Brienne when you need her?

There was more than one badass lady missing from the massacre of King’s Landing: Brienne of Tarth (Gwendoline Christie). Of course, it’s terribly sad that Jaime left her for his evil, conniving sister, but surely Brienne should have ridden after him and arrived just in time to save him from his entombed fate? It’s hard to blame Brienne given what Jaime did to her, and one could argue he’s simply not worth saving, but surely from a plot and character stand point it would have been fitting for Brienne to rescue him one last time from his stupid mistakes.