‘Game of Thrones’: Burning Questions After the Battle of Winterfell 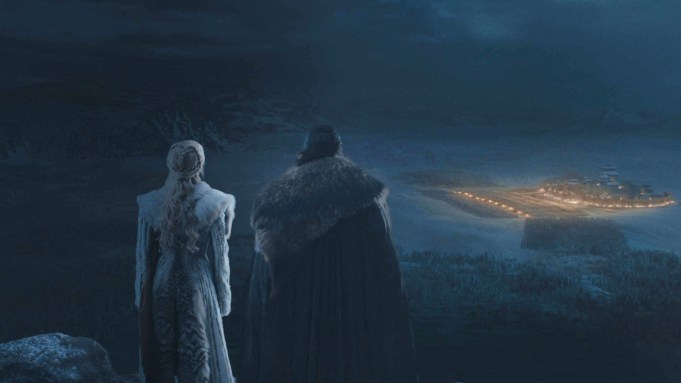 (SPOILER ALERT: Do not read on unless you’ve seen Season 8, Episode 3 of “Game of Thrones,” which contained the Battle of Winterfell. Seriously, don’t do it.)

In what was unarguably the biggest episode in “Game of Thrones” yet, the living of Winterfell not only held their ground against the white walkers. They (well, Arya in particular) vanquished the Night King once and for all, taking out the biggest threat to everyone in Westeros, but not without some tragic deaths.

However, that doesn’t mean their troubles are over. Far from it, in fact, as Jon Snow, Daenerys Targaryen and all who fight for them will now turn their attention to the South. See below our most urgent questions for the final three episodes of “Game of Thrones.”

Who will lead the north: Daenerys or Jon?
Now it gets awkward. Daenerys, as we all know, has had one goal: take back the Iron Throne. Jon, while he was named King in the North, has no desire to rule. However, both he and Daenerys know now that he has a legitimate claim to the Throne, being the child of Rhaegar Targaryen and Lyanna Stark. One might believe that Jon steps aside for the woman he loves — however, others in the North (we’re talking about Sansa here) could try to convince him otherwise.

After that epic battle, does the North have enough resources to challenge Cersei?
If only Cersei could’ve just played nice and offered her support to the living.

But no. Instead, she lied to everyone and kept her now formidable army to herself. The North previously had a lot to boast: the Dothraki, two dragons, the Unsullied and those who were fighting for the Starks. Though they won, they lost a huge portion of that to the Night King. Co-creator and showrunner David Benioff confirmed in the post-episode breakdown that what we witnessed was the “end of the Dothraki essentially.”

And, as Jaime grimly noted in “A Knight of the Seven Kingdoms,” Cersei has Euron Greyjoy’s ships and “20,000 fresh troops,” thanks to all that Lannister wealth.

Was the Night King a Targaryen?
Okay, so maybe this doesn’t matter quite as much now that he’s gone. But he was immune to dragonfire, and could ride the icy dragon — traits that have belonged, as far as we know, exclusively to Targaryens.

“We thought it was important that whatever the plan was, that it not just work out, because that would be kind of dull,” co-showrunner DB Weiss said in HBO’s after-show explainer. “While there’s no reason to know for certain that the fire wouldn’t kill or destroy the Night King, there’s also no particular reason to believe that it would.” Great, thanks.

Why did the plan go to hell?
Because Dany wanted revenge, essentially. Shortly after the horde was extinguished, the dragon queen was pissed, and immediately took to the skies to rain fire on the zombies.

“Dany can’t bring herself to just watch [the Dothraki] die,” Weiss explained. “So the plan starts to fall apart the second she gets on her dragon.”

Why kill off fan favorite Lyanna Mormont?
Lyanna Mormont, who quickly gained popularity despite having few lines, was originally meant to be a one-scene character. But after meeting the actress who played her, Bella Ramsey, Weiss realized they wouldn’t be “doing [our] jobs” if they let her go so quickly.

“We knew that you can’t give a big death to everybody who dies in this battle,” Weiss said. “But if she were to die, there was no way to not make a moment of it,” hence the epic zombie giant.

Is Arya the prince that was promised?
Book fans know the legend of Azor Ahai; he’s the predicted savior of man and whole reason for Melisandre’s being. First she thought it was Stannis Baratheon, then Gendry, after that Jon Snow… Mel doesn’t have a great track record on picking the lightbringer. However, when the red woman walked into Winterfell, just a glimpse of Arya Stark made her stop in her tracks.

Then she went and slayed the Night King and the internet reacted like so:

Arya = Azor Ahai reborn, the princess who was promised 👸🏻 GIRL YOU’RE A QUEEN IN MY EYES #YASSS #GameofThrones pic.twitter.com/MLntznqvm6

And then Melisandre died. So… job well done?

While the show creators were mum on Arya’s mystical lineage, they knew for a total of three years that she would be the one to end the long night. “We hoped to kind of avoid the expected, and Jon Snow has always been the hero, the one who’s been the savior,” co-showrunner David Benioff explained in the post-show extras. “But it just didn’t seem right to us for this moment.”

Who is still alive?

Surprisingly, kind of a lot. This episode was long suspected to be a main player bloodbath, but for the most part, the top of the call sheet remains intact.

Alive! Jon Snow’s exceedingly loyal dire wolf survives another episode. How do we know? Because he was in the teaser trailer for next week. But what of Arya’s dire wolf Nymeria? Still wild in the woods?