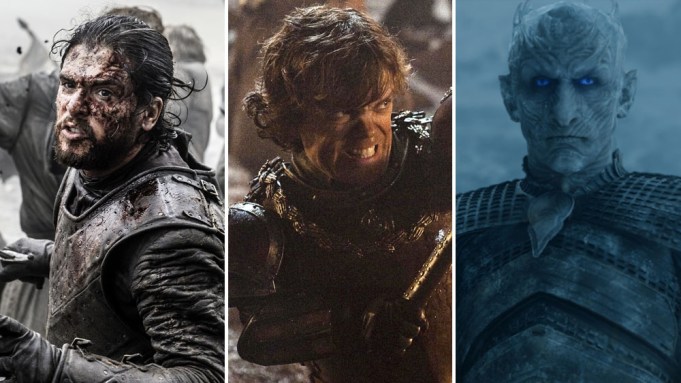 All men must die –– in pretty spectacular fashion.

The Battle of Winterfell in this week’s episode of “Game of Thrones” will reportedly be the longest recorded battle sequence ever filmed (for both TV and movies), and it was directed by Miguel Sapochnik of “Hardhome” and “Battle of the Bastards” fame. Last week’s calm before the storm was interrupted as the Night King’s army arrived at the end to spoil a quiet night of touching character moments. As we prepare to say goodbye to several certainly doomed, fan-favorite characters, let’s take a look back at the best battles in “Thrones” history.

A squad of some of the show’s best fighters –– Jon Snow, the Hound, Jorah Mormont, Beric Dondarrion, Gendry and Thoros of Myr –– journey beyond the Wall to bring back a wight to prove to the leaders of Westeros that the undead army means business. Surely it wasn’t going to be easy. A zombie bear mortally wounds Thoros, who gulps some wine to ease the pain and frigid temperatures, and the Night King traps the group in the middle of a frozen lake. Luckily, Daenerys swoops in with her dragons to rain fire on the undead army and save the heroes, but the Night King chucks an ice javelin at Viserion with the accuracy of an Olympic gold medalist. The dragon goes down, but is then resurrected by the villain and becomes a blue-eyed, ice-breathing weapon of the Wall’s destruction.

“The Spoils of War” skirmish in Season 7 set 73 stuntmen on fire –– an industry record –– including 20 people at once for a single shot. The sequence took 18 days to shoot and pitted Jaime Lannister, Bronn and their soldiers against Daenerys Targaryen, her dragon Drogon and the Dothraki army. Fans didn’t know who to root for. To stop Drogon’s destruction, Bronn manned a scorpion artillery weapon and launched a giant bolt into the dragon’s side, forcing it to land. Tending to her creature’s wound, the Targaryen queen didn’t notice Jaime charging at her on a horse, ready to take her out. Moments before Jaime would be barbecued, Bronn knocked him into a lake, and viewers let out a sigh of relief.

Jon learned the true power of the Night King in the tragic fight north of the Wall in Season 5. Book fans were also in for a treat as the battle against the undead was only mentioned briefly and left unseen in “A Dance With Dragons.” Zombies attacked Jon, Tormund and members of the Night’s Watch as they evacuated wildlings from the village of Hardhome, but the heroes suffered many casualties. In a tense, one-on-one sword fight with a white walker leader, Jon barely prevailed thanks to his trusty Valyrian steel sword, Longclaw, and turned the creature to ice shards. As the heroes escaped via longboats, the Night King emerged and resurrected every corpse on the battlefield with a slow, silent raise of his arms, growing his undead army. 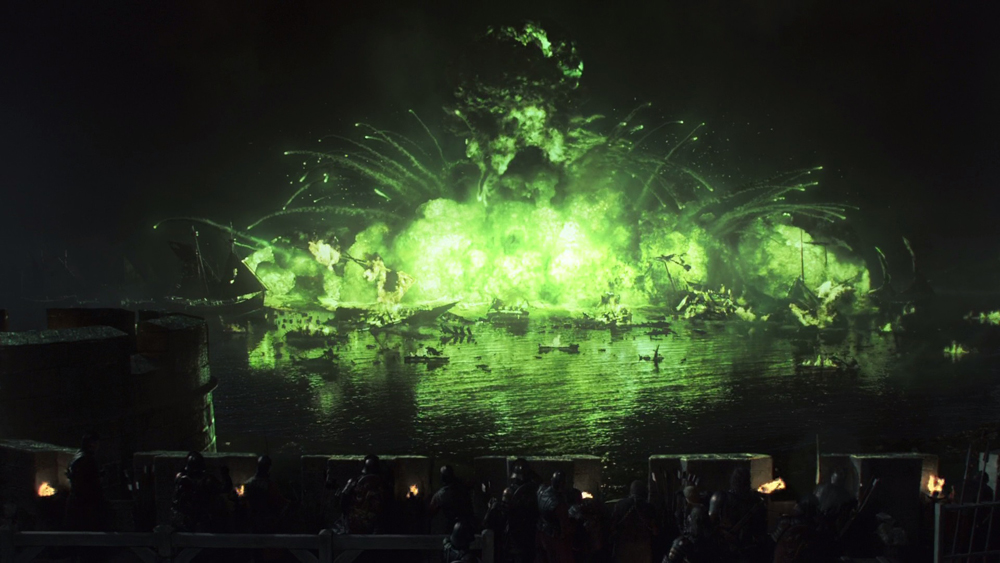 The siege that started it all. The Season 2 battle showed fans what the increased HBO budget could do and set the precedent for a blockbuster penultimate episode each season. Stannis Baratheon arrived at King’s Landing with his ships and soldiers, but found an impenetrable defense thanks to the leadership of Tyrion Lannister. Bronn kicked off the battle with a surprise attack: shooting a flaming arrow into a ship full of wildfire and taking out a fleet of Baratheon vessels in a fiery green explosion. The Hound made quick work of some of Stannis’ soldiers, beheading and bisecting men with effortless slashes of his longsword, before deserting the fight. King’s Landing remained intact in the end, but Tyrion received a permanent scar across his face, a reminder of a close call in battle.

The wildlings showed they were more than just a ragtag group of rebels as they attacked the Night’s Watch and Castle Black with giants and woolly mammoths in Season 4’s “The Watchers on the Wall.” Jon helped fend off the attack from his former wildling companions by ordering his Night’s Watch brothers to shoot flaming arrows and drop explosive barrels on the advancing forces. Grenn held the gate against an attacking giant, reciting the Night’s Watch oath to give him courage, and Dolorous Edd released a gigantic scythe from the Wall to knock off wildling climbers. The fierce battle included heartbreak, too. Jon’s wildling lover Ygritte took an arrow through the chest and died in his arms, saying they should’ve stayed together in the cave from Season 3.

The Season 6 faceoff between Jon Snow and Ramsay Bolton was inspired by the American Civil War and used 500 extras, 600 crew members and 70 horses across 25 days of shooting. The two bastard sons of their houses fought for control of Winterfell in a masterpiece showdown that earned the show two Primetime and four Creative Emmys. Ramsay killed Jon’s captured younger brother Rickon to bait him into battle, which quickly erupted into a maelstrom of arrows, swords and horses. The dead started to pile up fast, and Jon found himself nearly trampled to death by his own soldiers. Just as the Boltons started to pin in the remaining Stark troops and hope looked lost, Littlefinger and Sansa Stark arrived with the Knights of the Vale to save the day. To top it off, Sansa got her long-awaited revenge on Ramsay by feeding him to his own starving hounds.