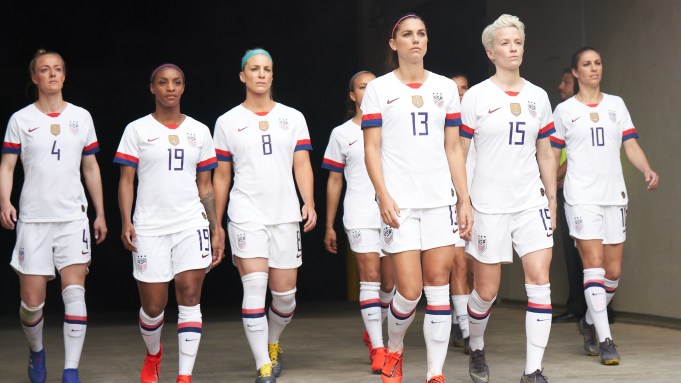 For its centerpiece commercial in the build-up to the 2019 Women’s World Cup, which kicks off June 7, Fox Sports knew it had to shoot to score.

The spot, titled “All Eyes On Us,” poses the question which soccer fans around the world will be asking: can anybody challenge the U.S. team, the undisputed queens of the international women’s soccer stage?

“Take your best shot. Just remember, you come at the queen, you best not miss,” says actress Carrie Coon, who narrates the spot.

The result is a fast, furious, immersive commercial. Robert Gottlieb, executive vice president and head of marketing at Fox Sports, says that also describes what it was like to shoot.

“Becky Sauerbrunn, who at the end of the commercial tackles the French player and goes flying, did take after take of that tackle. Don’t tell the coach of this, she’d lose her mind, but her knee was bloody by the end of shooting, and not a word of complaint, she was ready to keep going,” Gottlieb says. “But luckily we saw the blood and said we better stop before we injure one of these players, that would have been a disaster.”

The spot is of particular importance to Fox Sports given that, unlike for the 2018 Men’s World Cup, they have a U.S. team to place at the heart of their marketing campaign.

When it came to assembling a team to shoot the spot, Fox Sports brought on board Joseph Kahn, a veteran music video director who has worked with the likes of Lady Gaga and Taylor Swift, as captain.

Kahn says that he was initially attracted by the network’s pitch of centering the spot around a “gritty and singular” one-shot.

“They wanted this sequence in the middle of it where you get in amongst the players without any fancy editing or anything like that,” Kahn says. “Getting something choreographed and shot in one take is very interesting because we have such precision in the spot that you can’t do with anyone else, it takes a high-end athlete to pull off some of the stunts that were done.”

Kahn and his crew had only one day of shooting with the team, and he reveals that he choreographed the sequence in a parking lot with some doubles and his iPhone.

When he was able to get the actual players on the field, Kahn says he directed them like he would “any actor or musician,” and was surprised by how inquisitive many of the players were about the directing process.

“All of them were asking me what does a director do? So you set up the camera? You tell people what to do? It was like I was teaching in film school,” he says. “By the end of the day, when I was putting my hands up to frame shots, they started mimicking me. I would look up at the skies and they would look up at the skies, it’s almost like they were studying what I was doing.”